Daily counters of my site 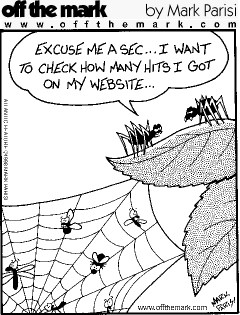 Some notes about my counters: I launched my site on 17th april 1996. From that first day till 27th February 2001, I relied only on logfiles to count visits, so that came up to about 1 198 389 hits on HTML pages, including search engine robots. With more than 2000 hits a day, the logfiles were getting hard to manage, so on 27th February 2001 I created a series of counters on each pages, each directory and the entire site (see below); they are graphic counters so they count only visitors who have graphic enabled browsers (which excludes search engine robots). This should be more accurate, as long as my PC is not crashed or saturated, since it handles the counting requests separately from the main site. They also have the advantage of being common to my different mirrors.

I will keep analyzing the log files for the wallpaper statistics and to keep the stats consistent with the counters.

Below are the daily counter statistics. The graphs are not normalized but scaled to the max value of the counter for the period. First graph displays the total for the site. Next 7 plots display the total by section. And after that each file of each section is detailed.
Note that the section counters don't add to the sum of each file in the section. That is because I have sometimes moved files from one section to another.

On Jan 1st 2002 a hacker broke my main server (or maybe it was the Y2K bug a bit late). I decided it was time to remove the lousy Microsoft IIS5 off my secondary server and replace it with a real one (Apache). After I did that and finally put back together bits and pieces of counters: surprise ! The number of visitors has almost doubled (woah, almost 10000 hits on in January !!!), sign that my site is only limited by the power of the server and the bandwidth of the line...

I lost the Windows server that was housing my counters in Dec 2003, so I rewrote a Linux-friendly one in Python. Since it's a text counter instead of a graphical counter the stats will be different yet again (it's much quicker so it doesn't slog when simultaneous requests happen). And I changed the structure of the display page to DHTML permitting sorting by clicking on the column headers (the white boxes).

Fast forward to 2007, apparently the python counter script was consuming too much resources on the server (after all it gets called on average every 3 seconds). So the alternate solutions are: