"Those that say you can't take it with you never saw a car packed for a vacation trip."

Left: A view folded, in place, from the back of the car. Notice the support board underneath. Compare with the last image.

Note that I won't accept any responsibility whatsoever if you saw off a finger, screw an appendage, get beheaded by the boards in a car crash, get post-traumatic disorder when it collapses in the middle of the night or get dumped by your girlfriend because you cannot afford to take her to a 5 star hotel.

Right: View of the double hinge and its numerous hinges (for solidity).

Left: A bottom view with most of the measurements. Note that the total length is 184cm, so it will sleep most people directly.

There were a few sparse pictures of our modified Kangoo on the site already but without further comments, which led to several emails asking for a detailed plan. First note that I have virtually no experience doing this kind of job alone and I had to purchase all the equipment just to pull it off; but overall it cost less than 100$ and ends up pretty comfortable, even for an entire week (and probably much longer but we haven't had much vacation yet). It's pretty convenient for week-ends, with all the camping gear already in the roof box of the car we can be ready to go in less than 30 minutes. And it takes less than 5 minutes between the time you stop the car and getting to sleep. You can't beat that with a tent.

Left: Driver side front support, which slides into the seat belt slot. Use 2 screws instead of one as shown. I forgot to mention it on the image, but the height is 4.5cm.

Some of the requirements in my design were: no modification to the car (since I may want to sell it the day I can afford a 'real' camper), quick to setup for the evening and fold back in the morning, secure in case of car crash, possible to be installed and removed by a single person, if possible compatible with the backseats (a requirement I dropped although it would be possible with minor adaptations), easy to get at things stored underneath, good at keeping the stuff underneath hidden, easy to enter and leave, comfortable for sleeping and if possible usable for other things than just sleeping (cooking in the rain was foremost in my mind).

Left: Passenger side back support.

The main idea is to use 3 boards that fold together. The idea being that it's easy to carry while folded, and you can fold one while driving so you won't get decapitated if you get rear-ended (I saw some similar cars modified this way with a unique board ending right behind the necks of the driver and his passenger. Yuck).

Right: Driver side back support, with cutout to accommodate the tank.

I'd made a first version where the boards lay on the top of the plastic back supports. But besides the fact that I wasn't sure if they'd last long with that much weight on, there wasn't much room left for us; in particular you couldn't sit in bed, which made it very uncomfortable. Also it wasn't secure in drive mode and needed to be completely folded, also loosing the 'hiding' requirement. Another drawback was that the front part was supported by the seats but you had to remove the headrests, which led to their prompt breaking. This new design fixes all that.

Left: Notice that the back supports are fixed to the back board with a pair of hinges but overlap the central board by a cm or so to provide support.

Right: Details of the security sling and handle (you can try making both in one).

Right: The central support board. Its length is slightly more than the width of the two back boards put together so as to provide support to the front one also. Note also that part of the bottom needs to be shaved off due to the shape of the ground of the car, it with provide longitudinal stability. As for lateral stability, there's a set of rails on top, and a groove on the bottom of the car itself (that's why the board is not centered).

Left: Central/lateral support board. It's held in place only by a groove at the bottom and a rail on top, screwed underneath the board. Note that the seat belt boxes, unlike the front ones, come off easily. The plastic support beams are visible on the right. You need to slide the board underneath.

Right: The whole thing in carrying mode: just garb the handles. Weight is fine for a single person. Everything is here except for 3 support boards.

Left: Same as before, lying on the ground. Before you insert it into the car, you need to invert the position of the boards.

Right: So open it all up, fold the front one, then the back one. Don't force it or it'll break as it's not possible to go all the way. Grab it and insert it into the car.

Inserting the board into the car: the trick is to invert the folding of the boards before inserting the whole thing from a side door. In details: put the folded package on the ground on its middle board; lift the front one 90°; lift the back one 90°; then close back the front one; and close as much as you can the back one without forcing. Insert in the car in this position from a side door. It's possible to do alone, but much easier in two. Then lift the whole thing while opening the back board and pushing it towards the back of the car. Put the two side support boards up, then the back ones and finally insert the middle one. Attach the security slings with biners and you are all set to drive away...

Left: The system inserted into the car and ready for deployment. If operating in two people, get one inside between the seats and one inside from the back. Lower the back board and push it below the plastic speaker supports. Install all the support boards after that (there are 5 of them at this point).

Getting in sleep mode: remove the biners; verify that all the support boards are in place (they tend to fall off while you drive, maybe velcros would be a nice addition); pull the boards about 20cm towards the front so you can lift the folded one; push back completely; unfold the front board (it barely passes between the seat belts); unhinge its supports and slide them into the slots of the seat belts; verify again the support boards; make your bed; get in from the sides; open the side windows and have sweet dreams.

Right: The support board and its guiding rail (leave a few extra mm between the rails).

Left: Driver side support board, fixed by hinges. The central board is only held by a rail.

Right: Passenger side support board, fixed by hinges. Note also the central support board visible behind. Put some cushioning underneath.

Right: Detail of the front board in folded (driving) position. Its support is also in folded position. Note that I used only one screw for the 'lock' but you'd better use two. Before you unfold the board, pull it forward 10cm or so.

Left: Detail of the handles and the security sling. Note that you could do both at once, but my sling wasn't long enough.

Right: Detail of the double hinge: the intermediate 130x1.9x1.9cm stick separate the two boards. Separate sets of hinges tie them all up.

Left: The bed in driving position. Don't forget to always attach the slings. Notice that you can already sit on it and possibly cook on it if you are in a rainstorm (with all the caveats associated with manipulating flammable materials in a vehicle).

Right: The bottom of the back of the central support board is shaved off to adjust for the shape of the floor of the car.

Left: The bottom of the front of the central support board is also shaved off to adjust for the shape of the floor of the car. Notice the groove alongside and the protective cushioning.

Total construction time is about 4 hours. Probably a lot less if you have experience with this kind of stuff. One of the tricks of the construction is the use of a double hinge between the front and central board, allowing the complete folding for transportation while also allowing for rigidity while there's a weight on top (which a simpler 'Z' fold wouldn't allow). The double hinge is just a stick of strong wood (oak) placed between front and central boards, with two sets of hinges between each. The hinges for the main boards and that stick are all screwed along the thickness of the wood. Because of this you cannot use boards that are too thin (even if very strong), and also agglomerated wood with strong directional anisotropies (a woodworker probably has a better term, but I work in cosmology). The hinges for the support boards are screwed through the boards more normally.

Right: A view from the top of the double hinge. Use strong wood such as oak as this is where you sit when you get into the car.

What's missing ? Some kind of net below the front of the board when in driving mode. As the ground is plastic, things slide towards the front when you brake. Also a curtain in that same place to hide what's underneath; and window curtains to sleep soundly.

Left: The front support board in place. The little piece of wood slides into the seat belt slot and locks it into position. You can now get onto the bed.

There are certain things you can adjust in the design: you can shorten up the front board by about 10cm if your height is less than 1m70, and it will make it a bit easier to open and close. You can also change a few cm in the height above the floor of the car (currently 34.5cm): put it a bit lower if you are tall and cannot sit while on the bed. Put it higher if you need more spare room underneath, but beware not to run into the support plastic beams of the back speakers (measure well first). You could also use thinner boards to save on weigh, but then the hinges get delicate to screw in and it also gets dicey doing any kind of 'activity' on the final result...

Left: Same view as the first, with the front seats folded forward and the front board unfolded: the bed is ready. Because of the position of the grooves on the ground of the car, the central support board is not right in the center, which is actually a good thing if you need to carry a large box or suitcase. At 184x130cm, the bed is actually quite spacious for two and can probably accommodate an extra child although that's none of my concern. Remember to keep the side windows open and never, ever, sleep with the engine on even if dead cold. Carbon monoxide poisoning is painless they say, but that doesn't make it nice.

If you build a cosy nest based on this design, send me a pic ! And if you want to know what else to pack into the car, look at Jenny's lists. 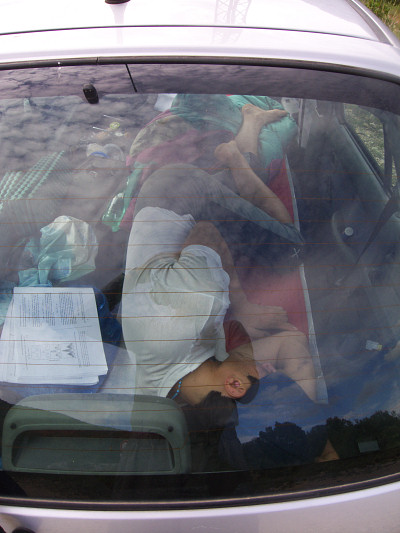 Left: A different method: Agostino sleeping on top of the pile of gear in his tiny car. You need to be able to sleep folded before you choose this option. 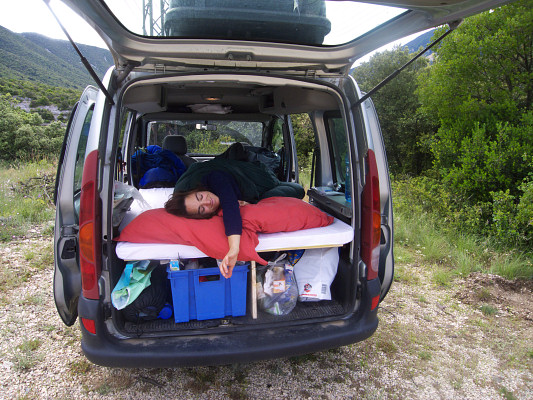 Right: The final version, with a 5cm thick foam mattress on top. I either roll the mattress with a strap or just let reach the bottom of the front seats (advantage, it covers whatever you have below). And yse, from the smile you can tell it's pretty comfortable...