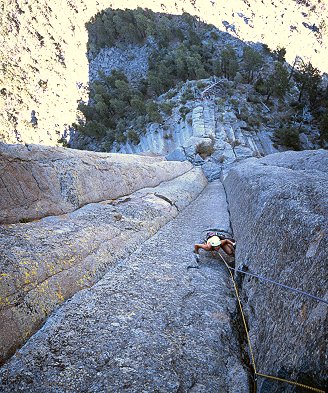 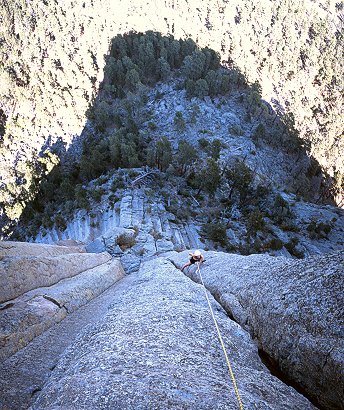 So how do you create vertical panoramas ? Well, just the same way than horizontal ones, but instea of using a cylindrical (=Mercator) or spherical projection, you need to rotate the assembled images prior to projections. Some programs allow you to do this in one step using the 'transverse Mercator' or 'transverse cylindrical' projections. Otherwise, in your panorama editor of choice, rotate your assembly 90 degrees to the side, perform all the adjustments just like if it was a horizontal panoramas (choosing either from cylindrical, spherical, etc...), produce the resulting image and then rotate it back in Photoshop.

Note that it's fairly difficult to find a subject worthy of a vertical panorama framing. It takes quite a bit of getting the eyes used to seeing things in vertical this way. Of course climbing is a pretty obvious target, but so is architecture, macro and many others. 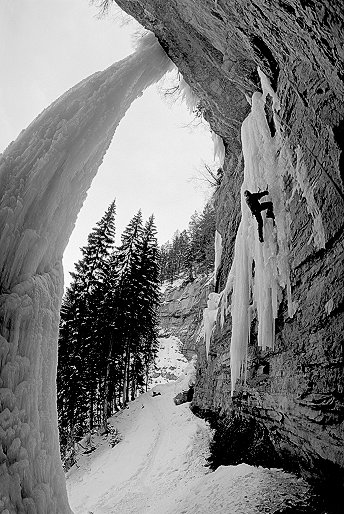 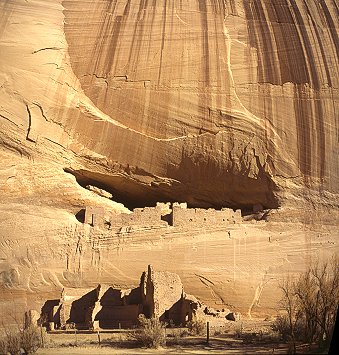 Left: Jason on the Thang right after I led it. The Fang is the big column dropping on the left. 3 horizontal B&W 20mm shots taken on top of each others while belaying him.

Right: The wall dominating this Anasazie dwelling was so huge that I took two 20mm shots on top of each others and assembled them. Canyon de Chelly.