"If the conquest of a great peak brings moments of exultation and bliss, which in the monotonous, materialistic existence of modern times nothing else can approach, it also presents great dangers. It is not the goal of grand alpinism to face peril, but it is one of the tests one must undergo to deserve the joy of rising for an instant above the state of crawling grubs."
— Lionel Terray

Just as you'd expect, Ecuador is located in South America, right on the equator. It's a small country whose main mountains are volcanoes. Some of them are easy classics while other require long approach and vulcanology skills. I went there in 1994 with a group of friends to visit and climb some of the highest (and incidentaly easiest !) volcanoes this country has to offer.

Left: Luck. There's no other word for it when a great Condor flies just a couple meters above you on your first hike in a National Park, here near Cotopaxi.

Right: An animal easier to see in the great plains, the Alpaga, a close cousin for the llama. Its wool is used to make high quality sweaters. Nice and comfortable souvenirs.

Left: In the back is Cotopaxi, the highest active volcano at 5897m (or 5911m, depending on the less than accurate maps). Here we ditched the car (a rented 4wd that was really only 2wd) on our way to do some acclimatization summit. Unlike Peru, a car is necessary to move from mountain to mountain.

Cotopaxi has erupted 50 times since 1738. The 1877 eruption melted snow and ice on the summit, which produced mudflows that traveled 100km from the volcano. The most recent eruption of Cotopaxi ended in 1904. The crater is still hot and snow doesn't accumulate inside.

We reached the summit of Cotopaxi after having spent only one week in Ecuador. Not much acclimatization for going at near 6000m. The altitude took its toll and we felt like shit on the last hundred meters (here a very green Vincent and his brother Thierry on the summit). Climbing in Ecuador is easy and straightforward: most volcanoes have roads leading to refuges at their bases and can be considered one day climbs... if you are acclimatized and in shape.

Iliniza has a double summit that doesn't look much like a volcano (it has not erupted for a long time). It was a few hours walk to get to the refuge (no gaz, we had to cook by candle heat). Then a nice'n'quick snow/ice climb to the south summit a little steeper than Cotopaxi. There are probably more steep routes on this summit.

Right: Here Thierry taking pictures of the north summit that looks like a pile of dirt. 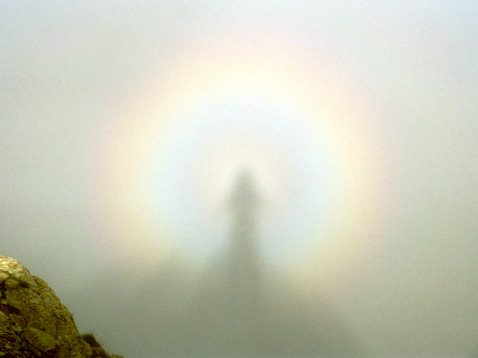 From the summit of Iliniza we were fortunate enough to see a Brocken spectrum (a.k.a. glory) projected on the haze below. It shows as a circle of rainbow colors around one's shadow. It is a rather rare phenomenon: the sky above needs to be clear and usually there is some low wind forming clouds just downwind from the summit. No good explanation has yet been given.

Chimborazo (6310m) is the highest summit in Ecuador and also the point of the Earth that is most remote from the center (that's because the Earth's radius is longer at the equator than at the poles). The equator line passes a few hundred meters from the summit, although I did not see it. It has not erupted in historical times.

Left: Here is the refuge that you can reach with a 20 minutes walk from the parking.

Then Thierry and Vincent did the Whymper the following day (lots of deep snow) while I went up the normal route with Fabienne Masson. The trail was in good hard-packed snow and easy to follow and it took us only a couple of hours. Too bad we did the whole thing in clouds.

Right: on the summit, in icy clouds. We knew we were on the summit from the amount of 'yellow snow' on the ground !

On our way down the easy 35° slope, we thought we had a vision out of the fog: 3 people going down like a caterpillar, holding each other by the thighs ! They were 3 clueless Frenchmen who had decided to rope up with quickdraws. "Hey ! It's lighter than a rope !". Yeah, and probably very nice for crevasses too... More candidates for the Darwin awards.

Then, there was only one more week of vacation to go. Most of the group wanted to go run naked and eat worms in the forest with the Indians while Vincent and I felt like we hadn't had our fare share of climbing yet. After eating some rats and nearly being killed by a mudslide in Baños, we took off more or less at random and decided for the other side of Chimborazo. First day of approach walking up scree slopes with big packs.

Then we didn't feel like going to the summit the next day (that is to say, Vincent was altitude-sick, as usual), so we just went for some ice-climbing on the face on a route that led to nowhere. Basically the rule was: "go where it's steepest". In fact it is hard for us ice climbers to find any routes of technical interest on those gentle-sloped volcanoes.

Left: Well, we managed to find a couple pitches of 80° ice. The rock around is real bad though.

The following day we climbed more or less straight up the face on what may be a new route, only avoiding some potential slab avalanches and a couple crevasses. This picture shows the steepest part, so no big deal. There was no ice, only hard packed snow. The hard part was in fact the crossing of the huge summit plateau to reach the true summit: there was a crust covering about 1m deep of soft snow, making it all but impossible to walk. We crawled on our bellies to the summit to avoid breaking through the crust ! Climbers on the normal route were walking on a nice hard-packed trail and were quite surprised to see us going to so much trouble... We had to show them what happened if you just stepped out of the trail.

Left: Traditional summit picture on Chimborazo, this time with some sun. The Altar is visible on the right and Iliniza (?) on the left. The Altar is not very well known but it is one of the nicest mountains of Ecuador. It is also one of the hardest, having been first climbed only in the 50's by an italian team.