"After looking at the Alps, I felt that my mind had been stretched beyond the limits of its elasticity, and fitted so loosely on my old ideas of space that I had to spread these to fit it."    — Oliver Wendell Holmes.

Left: The 'Croix des Tetes' in early morning, as seen from the Burned Pine Tree pass above the ferrata.

Right: The 2nd pitch of 'Fete des peres' is supposedly grade 4, and already I have to pull on gear. OK, maybe I'm not warmed up yet, but still, that doesn't sound good for the next 20 pitches...

Left: Below the tree grove where the hut is located, the visible rockslide has carried off most of the ferrata, reason why it's not advised to go up directly.

Right: The highway leading to the Frejus tunnel is clearly visible below.

Left: Strange insect (or tiny lobster ?) crawling on the rock.

Right: The route itself is very contrived, with pitches of difficult slab located just 1m on the side of a grassy crack. You feel frustrated trying to decide between dicey friction or muddy grass hugging.

Left: Slowly getting higher on the route. 22 pitches take a long time, particularly when the grades don't make sense. I had to pull on the bolts on one pitch of 4, two pitches of 5, at least two of 6a and everything above that. Normally I onsight 6c on long routes...

Right: The dihedral is one of the nicest pitch.

Left: Finishing the last pitch with time to spare.

Right: A view on the upper section of the pillar. The route finishes bellow the grassy patch.

Left: Going back down to the Burned Pine Tree pass... We are going back there tomorrow to try out another route, wish us good luck ! 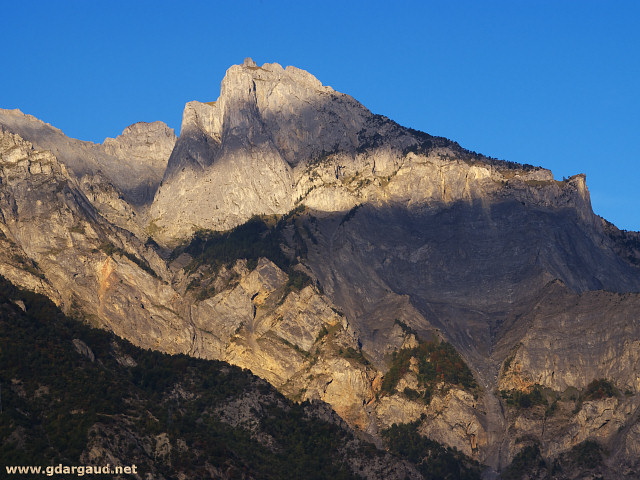 Left: The Croix des Têtes in the sunset, as seen from the highway. The two pillars are where all the routes are located; they appear small on the image but they span 600m and up to 22 pitches. The lower part of the approach is a dangerous mess and should be avoided.

A couple months later we did a 2nd trip on that same face on a slightly shorter route: 16 pitches instead of 22, but still opened by the same guys, so we expected the same kind of sandbag ratings. The route name 'Le labyrinthe de Minos' doesn't inspire much as to routefinding abilities, but except for getting lost at the intermediate ledge, it was easy to follow. Note: at the ledge just go all the way left until you find a lone bolt (60m pitch if you skip the intermediate belay), then climb up then left then down into the gully before heading up on the ramp, hoping for the best as far as rope drag goes.

Right: Agostino the day before our 2nd trip on the Croix des Tetes: here we are just climbing some minor cliff down in the valley to warm up in the afternoon. Twice.

Left: A view of the intermediate ledge.

Left: Jenny 2 pitches from the summit. Those pitches look easy, with the grass and leaner angle, but they still offer lots of dicey slab moves.

Right: Upper part of the route. In the back, between the two pillars of the face, lies a blank face, overhanging for hundred of meters, with just a rotting rope on what looks like a half-hearted aid attempt.

I led the first 8 pitches and Ago took the next 8. The route starts on the left side of perfect slab, hundreds of meters in height, harboring a slew of Abo-grade routes. From the very beginning the route hits us (or rather me) with boulder problems sprinkled regularly on every pitch. The start of the 2nd pitch has me stuck for quite a while.

Left: Just a couple pitches to the summit.

Right: Ago leading the slab of the last pitch.

Left: One of the minor pillars of the Croix des Tetes during the descent.

So, before the 1st time we went to the Croix des Tetes, the normal approach from the base collapsed and we had to do the long approach from the back, which goes almost to the summit and then down to the start of the routes. This time as we park I notice that the parking is different, and not just because of the damage done by the logging industry. The little spring in the back of the parking lot has actually carved a canyon 20 meters deep during what I assume is a recent rainstorm. If it's easy to go down, it proves harder to climb back up the other side, on walls of wet mud reminiscent of the best New Zealand climbing...

Right: 3rd and hopefully last time we do the early morning approach to the Croix des Tetes. Yeah, there's probably some kind of freudian joke with that image but it's not coming.

Right: Higher up on Elena. Elena is probably the easiest route on the Croix des Têtes, but it's pitches are still way underrated.

Left: Some grass on the upper pitches.

Right: It looks easy but it's not. And this pitch is probably rated something like 'doable in roller skates' or somesuch.

Left: Jenny resting on a tough move while hordes of mountain goats toss half the mountain down in the background.

Right: Arrival on the summit of the route with the main pillar of the west face in the background.

Left: Located between Maurienne and Cerces, the Pic de l'Aigle is almost in the backside of Briançon. The Galibier pass feared by bikers is almost visible from the routes. For the approach we tried a novel approach: mountain bike, followed by a short hike up scree slopes in bike shoes, and descent from the summit also in bike shoes. Not all that convenient.

Right: We climbed two routes on that day: 'Classe mort classe', an excellent route made out of 4 pitches of 6b. Well protected, varied, good moves, nice rock. Very nice.

Left: We enjoyed that first route so much that we decided to walk back down quick and start up another one. We chose 'Castor respire', at a supposedly similar level.

Right: Panorama from the top of the routes, below the true summit. On the left behind the lakes at the Rochille pass is the Clarée valley leading down to Briançon, while on the right is the Galibier pass behind the northernmost summits of the Cerces.

Left: It proved to be another kind of route entirely: poor rock, poor protection, difficult routefinding, natural pro very hard to place... I very nearly shat myself on the last two pitches when a sequence of dicey cams was all I had for pro on sustained slab and then steep finger muddy crack.

Right: The lakes at the Rochille pass.

Left: A little bit farther than the Eagle Peak, the 'Statues' is a small range with a few good routes on it. Here a view of the approach with the Meije in the background.

Right: A view of 'Les Statues', with the route 'Aquastress' right in the middle of the image.

Left: Jenny on the carved limestone of Aquastress. You can even protect it with cams, although there are enough bolts.

Right: View of the Rochille camp from the Statues trail, with the Eagle peak on the left.

Left: Not too quiet, you have the river below and the road just on the other side, but the climbing is still excellent. Go there on hot days as it's in the sun only in the morning.

In younger days I remember doing downhill skiing competitions for several years in a row in Val d'Isère. To be fair I also remember testing the very first model of snowboard to arrive in france 30 years ago... right on top of the olympic downhill... and stopping 1000m farther down after only one successful curve ! In summer Val d'Isère is also know by bikers for its harsh Iseran pass linking Vanoise and Maurienne, but I'd never heard about it for rock climbing. Right at the entrance of the station there's an unassuming rock on the left hand side with only two routes and a ferrata. Access is very short and descent is quite scenic for the one we did: 'l'éthique ou le chaos', and it turned out to be one of the best routes I've done this year (and so far we've climbed 22 routes longer than 10 pitches).

Right: The 'shame ledge' as seen from the crux 9th pitch. The route was opened from the ground while other people were 'building' a ferrata crossing it. Different ethics. And plenty of ways to get stoned by idiots although most of the route is so steep that the risk is low. Just as Jenny was building up energy to try to free the crux 7a, two guys arrived on the ferrata and stood for a while, watching.

Left: Last pitch. The route is very sustained, we only one move I couldn't figure out on the very first pitch and a violent bit of gear pulling on the crux.

Right: Located just above 'La Daille' right at the entrance of the station, the summit offers a great view on Val d'Isère.The route has no rap stations so that should motivate you to finish up. We found out that the climbing was very technical and slower going than usual. As it was 'only' 11 pitches we started late nut we made it to the summit only shortly before sunset.

Above: Panorama from the summit of 'Roc de la Tovière' at the entrance of Val d'Isère.

Left: The lake of Tigne. There used to be two routes made out of climbing holds built on the tall side of the dam. I have no idea if they still exist but they were probably the only multi-pitch plastic routes in the world (?)

Right: Sunset on alpine grass and ruined shepherd house. In winter people ski here. Lots of them as Val d'Isère has remained my favorite downhill ski station ever.

Right: Vertical panorama of the bridge above the waterfall on the Pontamafrey ferrata.

Left: One of the several interesting routes on the Pontamafrey cliff. Short approach, fast descent, you can easily do 2 routes in the afternoon.

Left: Climbing at Pontamafrey, above the Maurienne highway.

Above: Summit of the Grand Coin, in Maurienne, with sheep herders watching their flock from a distance.

Left: The Mone icefall at Pesey-Nancroix: 4 jumps separated by flat walks make it safe for multiple parties to climb together.

Right: An honest grade 4 in good ice, not scary for once.

Right: The Daille icefall at the entrance of the ski resort of Val d'Isere. The waterfall is just on the other side of the valley from the rock-climbing route.

Left: A view on the Tignes lake from the summit of the Daille waterfall.

Right: Two climbers nearing the top of the Daille waterfall.

Right: The route is mostly face climbing, with a chimney section.

Left: Summit of the route. It was an interesting day: we worked till 5 at a conference in Aussois, then grabbed our packs and ran to the cliff, climbed the 6-pitch route and were on time for the 7pm appetizer in the restaurant at the summit (visible here).

Left: Entry to the restaurant in what used to be a military fort.

Right: View of the village of Aussois and the mountains behind.

Left: Two climbers are already on it.

Right: Bernard on the 2nd pitch of the monolith.

Left: Bernard trying to stand on the narrow summit, reminiscent of the best desert towers...

Right: Rappelling off the monolith.