A quick tour of Madagascar

"Madagascar is a country with a bright future ahead... and it will stay this way."    — Charles de Gaulle. 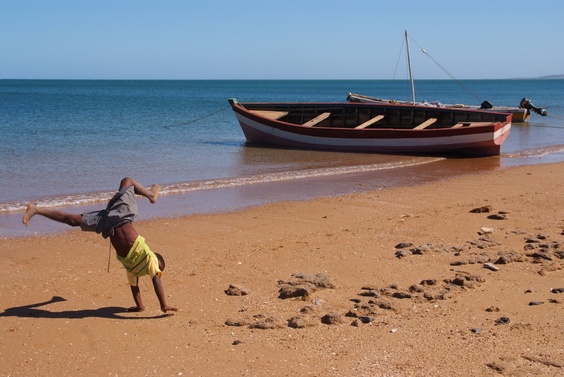 Left: Kid doing flips on the beach in front of a fishing boat that looks eerily similar to what you can see in the Brest harbor.

One thing about malagasy people besides being very friendly is that they like to talk. Often in the streets there are people saluting us and when we answer back they try to initiate a conversation. At first we were a bit leery of this, but after a few times where they never asked for anything in return, I struck a long conversation with a young guy in Ambalavao. He explained that most students learn french and english, the former for historical and practical reasons (aka colonization and the fact that most tourists are french), and the latter because english has just be named the 2nd language of the island in the hope of attracting investors. But they learn mostly from books and the only way they can practice is by talking with tourists. 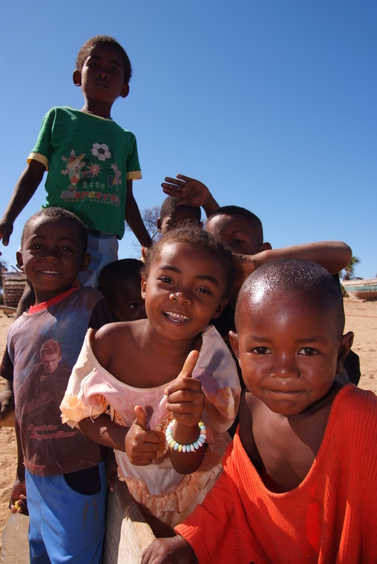 Right: Kids on the beach while we are waiting for our tiny fishing boat to depart for Nosy Hara.

So while I'm wandering around town gathering some supplies and trying to do some phone calls, Jenny is waiting for the taxi-brousse and I find her surrounded by a handful of young guys, in full conversation. Little kids in the street often go "Bonjour Vaza!" as we walk by. Vaza meaning 'foreigner', but also rich and white, 3 concepts that seem rather indiscriminate in Madagascar. 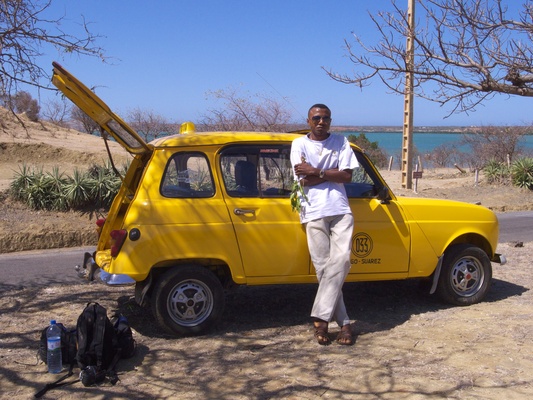 Left: In Antsiranana all the taxis are archaic yellow Renault 4L. It makes them easy to notice in town but also particularly interesting to ride after the driver has been chewing khat leaves all day while waiting.

One of the main drawbacks of malagasy cities is the pollution. There's clearly far fewer cars than in western countries... but they polute 30 times as much ! If you walk around a city all day, in the evening you pry off black nuggets off you nose which you can use directly as coal. 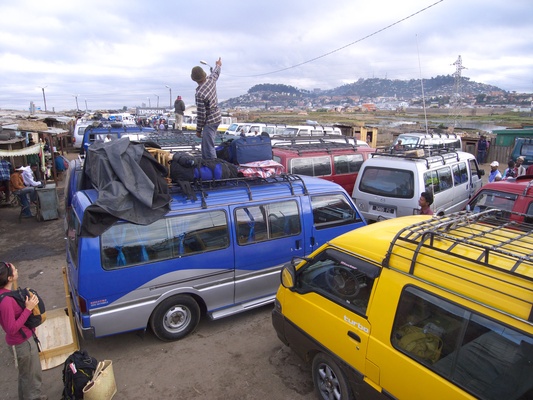 Left: The taxi brousse, only mean of transportation for most of Madagascar: 18 to 21 people crammed into a metal and glass box for 10 hours on a winding road. You don't know when you arrive and you don't even know when you start as it leaves only when its full.

A staple of traveling around the island is the taxi-brousse: collective taxis running in minivans of about 18 passengers. The experience has multiple stages. First when you come to purchase a ticket. Tana is the worst for this as when the taxi approaches the bus station there are hordes of crazy guys yelling at us. The reason is that there are plenty of concurrent companies for the same destination and they all try to get you to use their company of choice. You can't even get out of the taxi, so good luck walking around to pick a company. Might as well let you get carried by the flow and pick the first one... 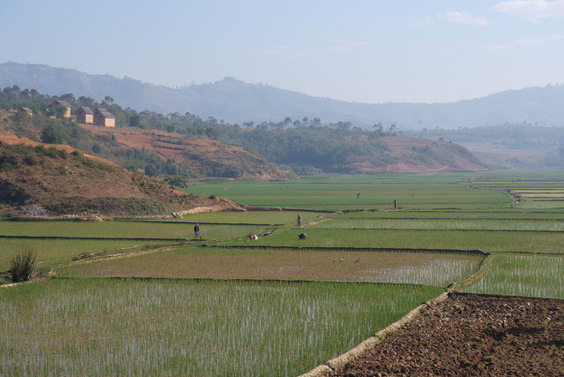 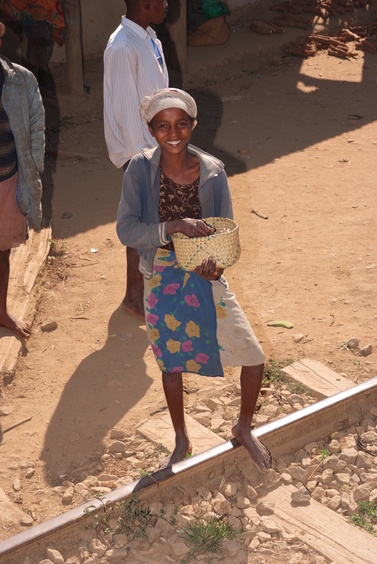 Right: Madagascar is the world's first consumer of rice per capita, and it shows with the presence of rice paddies everywhere. Even during the dry season you still find many being cultivated.

Left: At every stop of the train there are people selling their local specialties, and it changes from stop to stop: banana cakes wrapped in banana leaves (quite good), peanuts, plenty of bananas, manioc roots, fish on a stick, etc...

Then in the morning as you arrive at the planned departure time (usually 7am), you get to experience... the wait. A taxi-brousse will start only once it's full. Since many companies share the same destinations, whoever fills first, starts first, leading to some near-fights between the drivers over a last potential passenger. In Tana we waited 2 hours. In Ambalavao, more than 3 hours. 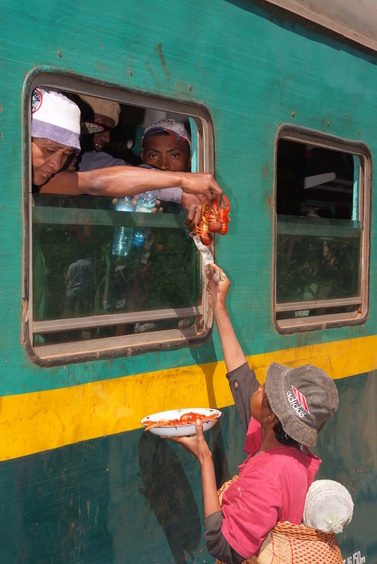 Right: Purchasing cooked crayfish right out of the window of the train. There's only one stop where they sell them: in the stop right before Amdrambovato, so if you are ever on that train, don't miss them.

So you stand around the minivan and they put packs, bags of hay, tied-up chicken and furniture on top and when they start to tie it up you feel hopeful for an incoming departure. Then someone shows up with a table, a sofa or 10 bags of hay and they untie and reorganize everything. And this goes on for basically every new passenger. 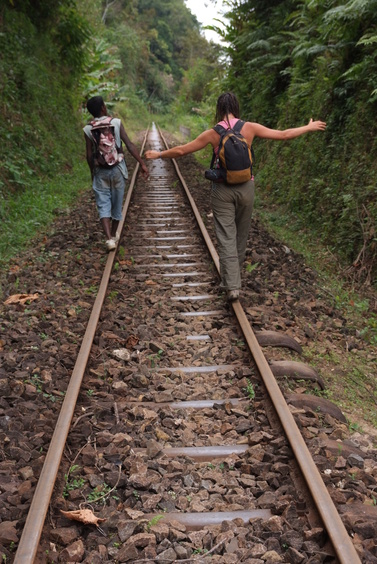 Left: After our tour of the mountain and the waterfall above the train station, we walk back to the village 3km on the rails. As it's the only mean of communication with the outside, with only one train a day, I'm surprised they don't use modified bicycles instead of awkward hobo rail walking.

Then once you are on the road you get to experience being packed in a space too tiny for your legs, making you long for the cheap airliner that took you here in the first place, all the while being shaken around on the very winding road while submitted to horrible pop music on scratched CDs and saturated speakers. Which one is the most nauseating is left as an exercise in masochism. 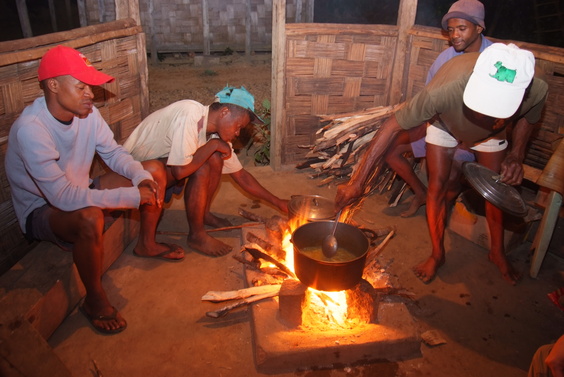 Right: The organizer of our trip, Santos, chilling out in the kitchen hut.

Fortunately we didn't get to experience the increasing number of unfortunate road attacks. While on the road we look at the continuous terraces of rice fields and at the sellers by the side of the road. I'm surprised to see that they all sell the same things, by area: for a few kms it's all honey in plastic bottles, then bags of leaves (for composting?), then bags of grass (to feed zebus?), then bags of coal for the universally used stoves, and at a certain point unexpected cutting boards. At the same time the clothes and head dresses of people change, some of them quite beautiful. But as much as we'd like to stop and stretch our legs while doing a bit of shopping, the taxi-brousse chugs along and stops only once every 2 hours for a brief bathroom stop when some trees are available: all the men on one side, the women on the other. 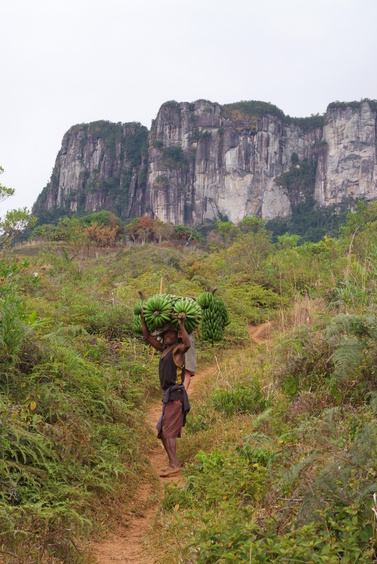 Left: No roads in this area, only a few trails and I'm really surprised to see that they don't use pack animals. No mules, no donkeys. The only animal is the revered Zebu and it's used to plow rice fields or pull carts.

Talking about the toilets, take Jenny's word and DON'T go to the toilets at the bus station in Tana ! A bunch of planks with a sign announcing the prices (cheaper for mipipi than for micaca) may give you the idea that, maybe, someone takes care of the cleaning... Well, she went there and came back with a truly frightened look that implied she couldn't believe what she'd seen. 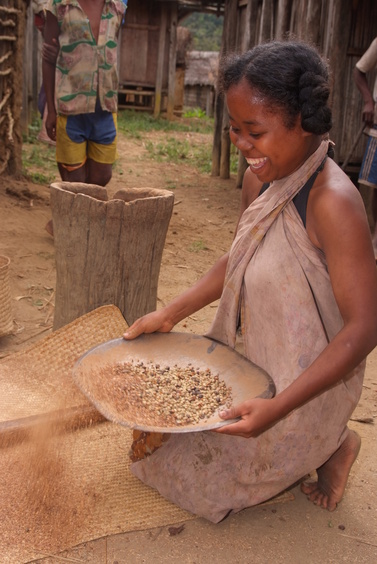 Right: A teenage villager giving us a lesson in coffee making, here after drying the beans, they crush them in a mortar and shake the results to eliminate the outer shell. Then they roast them. The juice of the crushed sugar cane is put to a boil and the roasted beans thrown in. Original way to make coffee.

But back to the taxi-brousse experience. The vehicles doing long distance runs are in good shape (expect a worn out tire or two), but when you take those that go short distances to out-of-the-way villages, then the fun starts, like a minivan that starts only downhill and that stops every 15 km so that they can tinker into the engine. And things like chicken or ducks under the seat only add to the fun. 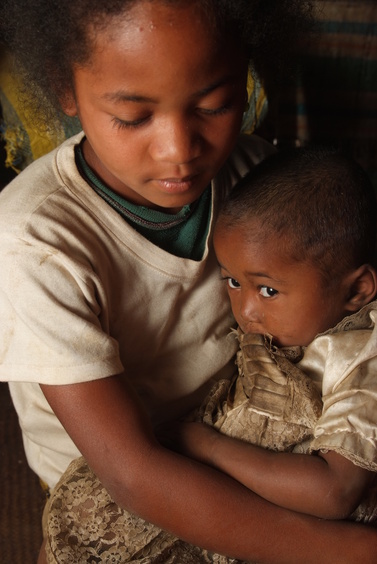 But plain old taxis can be fun too. First of all they bring back memories of good old day because most of them are either Citroen 2CV or Renault 4L, two old and cheap classic french cars. Everything in excess has been stripped off, like door handles, side plastics, rearview mirrors and even... fuel tanks. When you take a taxi for anything more than a km, the first thing the driver does is head to the station to fill up a plastic bottle with fuel. You think it's to put in the tank 'just in case', but no, the driver puts it by his feet with a tube in it, directly connected to the engine... Let's just hope they don't smoke. Actually they are more likely to chew khat than smoke, which leaves you with a driver in full mydriasis (probably good for driving at night though). 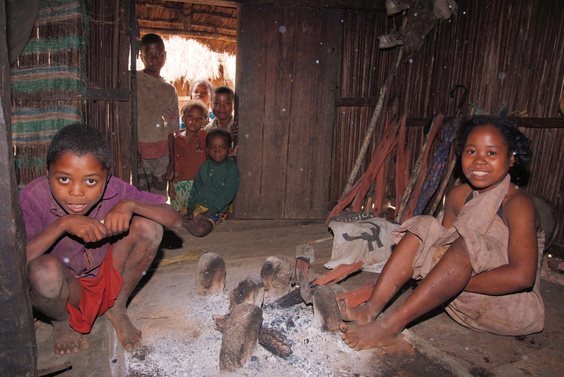 Right: A traditional malagasy house: raised on poles, containing a single room, with a fireplace in the center, very dark and depressingly empty. The only openings are the door and a slot below the roof to let the smoke out.

One thing that struck me in Madagascar is that they grow bananas basically everywhere, but the fruits you can buy are plain as bad as in the west. Then I noticed that they pick them up unripe, even for local consumption. I remember fondly the excellent and varied types of bananas in Peru and Ecuador, but here you just can't find good ones. A local grower told me that he lets only a unique tree ripens fully for his own use, but he doesn't sell those. 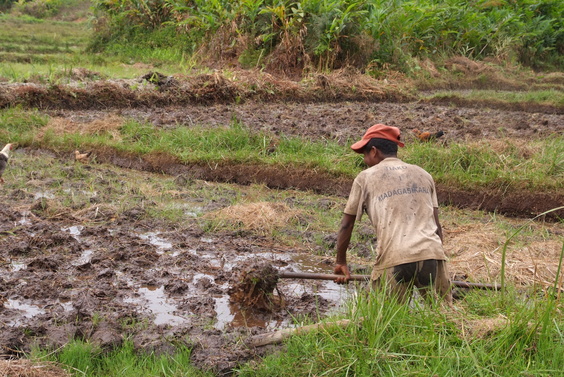 Left: Work in the rice paddy. 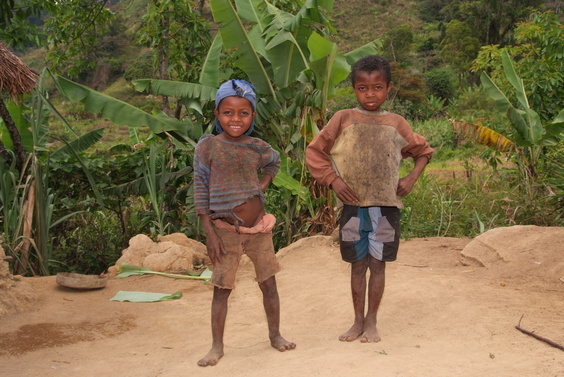 Right: Happy kids in the villages. 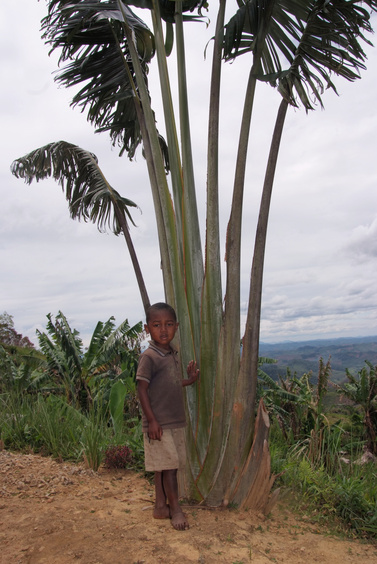 Left: The son of our cook showing a Traveler's Tree, one of the symbols of Madagascar. 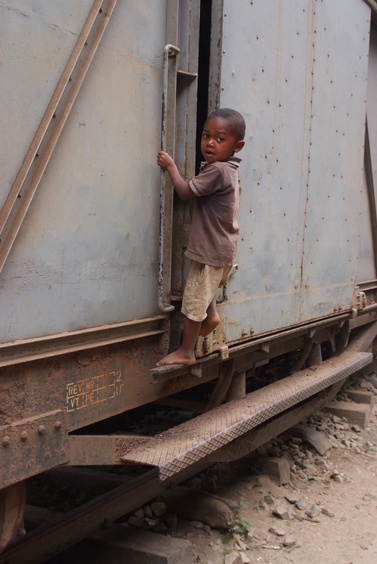 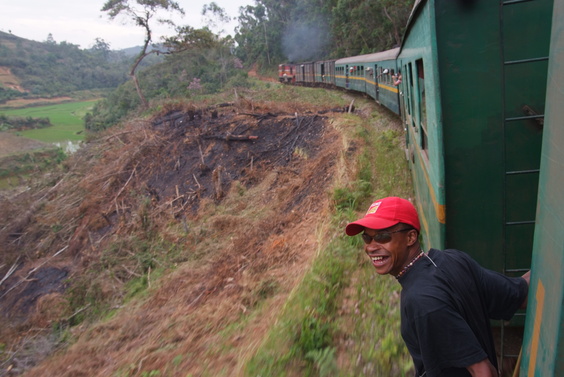 On the last 2 days of our trip, we plan to do a little tourism taking the old train running from Fianarantsoa to Manakara. As we are in a restaurant in the former city discussing our plan, a group of young guides approaches us to give us advice and travel suggestions. We take their 'package' to stop halfway in the mountains and spend two days in a village lost in this national park. It turned out as a much more interesting and complete experience than just riding the train to its terminus; between hiking up the local mountain, taking a dive in the 2nd highest waterfall in Madagascar, seeing interesting plants and animals as pointed out by our guide, playing with the kids, getting a lesson in coffee making, meeting the king of the village, being invited in a poor but happy household and eating the excellent chicken of our cook... 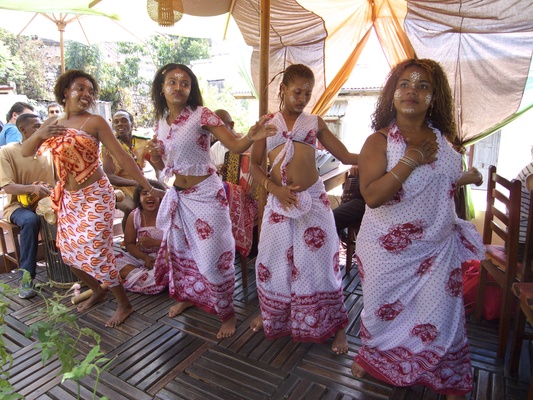 Above: A view of Antananarivo from near the Queen's palace.

Right: Dancers in a restaurant in Tana.

In my own biased opinion, no big city in the world is worth wasting time in it and Tana is no exception. The big castle on top of the main hill is just the empty shell of itself after a fire. The museum next to it is in utter disrepair and has only 3 rooms full of rather worthless artifacts (many of those are actually bad pictures of worthless artifacts). The heart-shaped lake with beautiful purple crying trees (they really do cry on you) is let down by the human excrements surrounding it. Some areas make you wary of walking around. In other words, I don't advise spending a minute there more than necessary. And the distances are huge due to the fact that between each suburb there are wide areas of (the most polluted) rice paddies. So don't hesitate to take a taxi if you move around the city.

Above: A view from the heart-shaped lake, with the crying trees in full bloom.