"Offwidth crack /n./ remark made in a smartass manner."

"Why did we decide to come here ?" I ask myself as I'm being sandbagged on a 5.8 offwidth. I borrowed all of Brad's big gear and so far I've used all of it... and pulled on all of it too, totally unable to make any free move on this nightmarish rounded up offwidth while the crystals in the rock shred my arms and knees. And no matter what amount of bitching I did, Jenny thought the crack was even worse than my swearing had led her to believe...! That's also why we don't have any pictures of offwidths: she was too busy trying to catch me.

Right: In Wedauvoo there's a choice only between offwidths or slabs. You are lucky if the former don't shred you and if the latter are bolted.

So the route wasn't in the recommended section of the guidebook. So there are people who actually like to climb in Vedauwoo. So we've been climbing on granite for only 6 months. Still, it was hard. And indeed most climbers around us were doing other things than climbing: ascending ropes, building weird rope setups with 15 backups, tying ascenders to their shoes, playing with dogs, looking for mushrooms, bragging at the base...

Left: Is that a double heel-hook ? Hmmm, must have been the mushroom.

We did some of that too, and also some bouldering attempts up rocks that had crystals as big as my fingers... except that they would break off with razor sharp edges. Some boulder problems are akin to sticking your hand in the mouth of an angry shark. I believe that when climbers go to hell, they are condemned for all eternity to lead a 5.11 offwidth at Vedauvoo naked, without gloves, with only 5 small hexentrics on their rack, a frayed rope and a belayer who plays with a dog at the same time...

Right: Start of the first pitch of the MRC, a 5.9 classic.

Well, It took a a entire year to gather up the will to go back to Vedauwoo, but the 2nd trip was much more pleasant. I don't know if it was a better choice of routes, if we are just getting better at granite and cracks or if the hand jammies are better than plain old tape. In the morning we headed off a 3 pitch classic, the MRC, a crack climb with a hard crux in the middle of the second pitch. The last pitch, a variation called the Straight Edge, has the look and feel I remembered from past Vedauwoo climbs: starts as a decent hand crack, but then turns into a fist crack that will leave some durable scratch marks. It may be 5.9+, but then again it may not.

Left: Jenny arriving at the first belay on the MRC.

In the afternoon we went to the right of the Coke Bottle, a large formation, for some slab climbing. While I was leading a nice 5.10, a party started a 5.9 route on the next. Young guy with wife and baby. He got halfway up the pitch, where the first bolt is and I heard the 'whack' noise: he was flying backward and the rope wasn't doing much. Crater. Silence. They were behind a large boulder and we couldn't see them; I raced up the last two bolts, clipped and Jenny lowered me quickly; we raced around the boulder to find him bruised but otherwise OK sitting on the ground, his wife scared but glad he was okay and a crying baby. Apparently his cam came out and I found is stopper still on the draw but the draw not attached to the rope: the bent-gate binner strikes again...

Right: The Straight Edge, 3rd pitch 5.9+ variation of the MRC. Looks like removing dingleberries from a really fat ass... 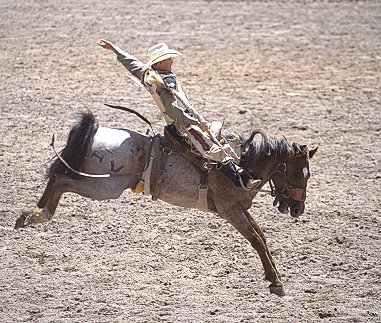 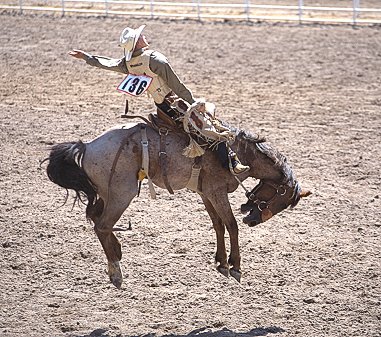 A little interlude from climbing which is far from being the craziest activity around Wyoming. Rodeo comes far above in that category. We went to the Cheyenne Rodeo one afternoon and it was quite a convenient place to take pictures of riders... and fallers. If climbers ended up on the stretcher that often, I'm sure the cliffs would be far less crowded. So those first two pictures show a successful saddled horse rider... 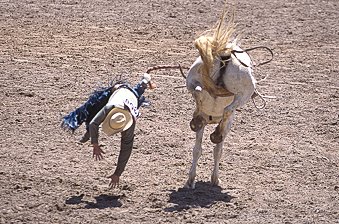 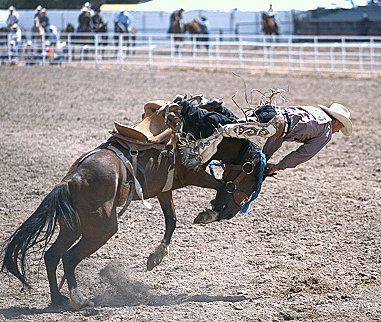 And those two show the usual end of the ride... Those guys must wake up with some headaches. 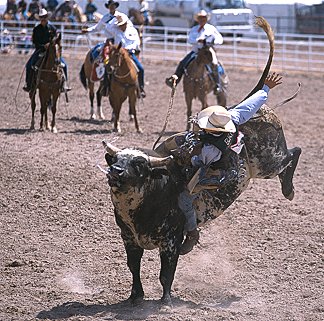 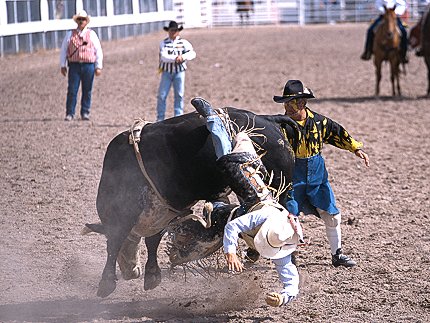 Even more impressive than the horses, the bull rides are often so fast that they are finished by the time the bull gets out of the booth... 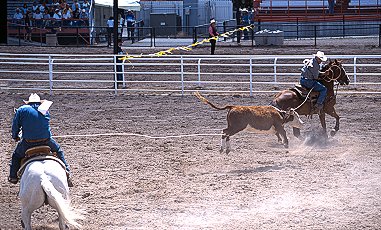 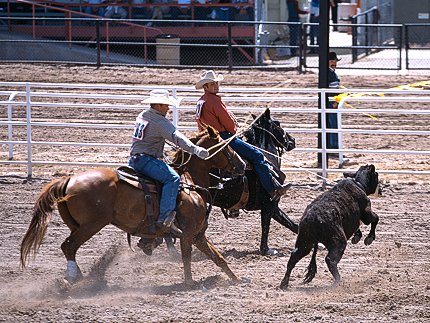 Less dangerous but an impressive display of skills, here are two pictures of lasso veal catching.

This is now on a separate page about climbing Devil's Tower.

This is now on a separate page about climbing the Grand Teton.

Joining the crowds in Yellowstone

No comment here since that park with its zillion tourists a year is plastered all over hundreds of websites. Just a few pics to show climbers spending some time in the Tetons whether or not it's worth a side trip. Personally I'm not sure except if do have a deep liking of geology or crowds. All those pics are also available for use as wallpaper

Left: Rock flakes in a spring.

Right: The Grand Prismatic spring seen from the top of the nearby hill.

Left: Dried up spring in Yellowstone.

"Wyoming, where men are men, women look like men, sheep are scared, cars get stuck, knees give way and it snows in august."

Left: Pingora and Wolf Head looming above the Cirque of the Towers.

This road trip started off pretty bad. On friday morning we shipped all our possessions. That is to say everything we couldn't fit in the car or that wasn't necessary for the 3 odd months of the planned road trip. Then I rushed to my last day at work to say goodbye, eat the departure donuts and do some last minute backups. After that we went out for dinner before coming back to our now empty apartment. Do we want to leave for the Wind River range now or do a few last climbs in the Park first ? Okay, let's spend this last WE in the park we loved so much. We get up at 2am, destination the Flying Buttress on Mt Meeker. Jenny is unusually slow. I mean she is unusually slow for such an early start, slow to get up, slow to get in the car, feeling sick all the way. And when we start the hike in she's like drunk, can't put a foot in front of the other. After half an hour and 10 rests we've done only about 200 meters on the trail. Okay, something's wrong, let's go home. I check her out and with some Internet diagnosis it's easy to see she got the latest fad: the West Nile virus. On the first day of the road trip, great. Sunday she rests, we have a last pizza party with friends and on monday we pack up the car and head for Wyoming.

Right: Camping in the Cirque of the Towers.

When we get near, we have the xerox of a map where the 'Oregon trail' is marked in big. We find a small road, closed by a gate, with old Oregon trail markers. It quickly turns into a 4 wheel drive festival of holes, rocks, high cactus growing in the middle and sleeping cows behind curves. After we hit a particularly nasty rock, we think that it can't be the proper road, head back out and find the proper one just before it gets dark. In the morning we hike in and are pleasantly surprised to take only 2 hours to reach the lake. Didn't Jason tell us: "It takes about 5 hours to reach the lake. From there it's only about 20 minutes to the climbs..." ? Little did I know which lake he was talking about. We take a long break and decide to go check the Cirque out. We hike and hike and get to another lake.

More hiking take us to a second lake. And even more to, finally, the Cirque of the Towers itself. Shit. We go back down, repack, and head back up again. When we arrive Jenny's complaining about her knees and, after sitting down, she can't get up anymore. She won't be able to for the next 3 days. In the evening we open up the flap of the tent to look at the stars, start pushing our heads out while still in the sleeping bag and she yells and grab her face suddenly: an ant fell from the tent right into her eye and bit her ! It's hard to believe so much bad luck, I knew I shouldn't have boasted on rec.climbing to all the suckers stuck at work before starting the road trip. She's half blind for the next day but in the morning I can tell it's not too bad anymore.

Left: Pingora in the morning.

So we are in this beautiful spot, looking at climbers everywhere through our binoculars, and we can't do a thing. I'm not too interested in looking for other partners and it takes me 3 days of intimidation before I gather the guts for some soloing on the easiest route up Pingora. Just a long 5.2 with some exposed moves and a sections with big rocks balanced on each others. When I reach the rappel anchor below the summit, a russian climbers looks at me and goes: "Aren't you the guy with a website ?"...

After that short climb we decide to go down. And it takes two days. First day we work a routine and reach the intermediate lake as it starts to rain and then snow. The routine is: I run down some way and leave my pack, then head back up, take Jenny's pack and run back down again. Even though, I often get there before her and have the time to pick some raspberries in the drizzle. And, a bit funnier, I keep passing (both ways) some groups of hikers. After we reach the lower lake it's all flat and she can walk out more easily with her own pack, good ting too as it's getting to rain pretty hard. But where can we go now ?

Right: Sunset over the mountains, Cirque of the Towers.