"The Eskimo had his own explanation. Said he: 'The devil is asleep or having trouble with his wife, or we should never have come back so easily'."    — Robert Peary (1856—1920), polar explorer.

Left: GroNitho soloing on an iceberg in full winter...

You'd think that, with so much ice, Antarctica would be a paradise for climbers... Well, that is not so. Several reasons to that. One of the main reason is that it is flat. Hopelessly flat. On the plateau, inside the continent the is nothing to do, as you may have already seen on my pictures of Dome C. There may just be a couple crevasses where the big glaciers start going down.

The Transantarctic Range would be a lot more interesting, with peaks like Mt Vinson rising up to 5140m. I flew above it in a Twin Otter and saw quite a lot of interesting places: snow couloirs, high and steep peaks, long ridges... Instead of being bored brainless for 3 months going to the south pole pulling a pulka like most adventurers do, I'd rather go climb there. There are also some of the most fantastic Big Walls in the world. 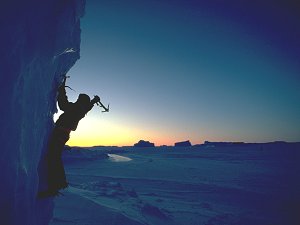 Here is one of the only place with ice from water (not from snow or glacier), just downhill from the base. About 20 meters, but a huge overhang (up to 40° overhang !). The ice was very hard, I fell several times and eventually gave up on the steepest section. In Antarctica liquid water is very rare since the temperature goes above zero only rarely. All the ice to be found comes from packed snow. If it's snow of the year, it's too soft and if it's more than a couple years old it turns to brittle ice.

In deep winter there is barely one hour of daylight near Dumont d'Urville, so you've got to make the best of it, like with a quick solo such as here...

Right: Top-roping on the Astrolabe glacier.

In some places the ice was OK to climb on. Here we are on the side cliff of the Astrolabe glacier, about 30 meters high, a dangerous place in summer, but quite stable in winter. The ice's too hard and brittle, too risky to lead, but top-roping is OK. Here Grosnitho and Pêcheur-Bleu who were using ice-tools and crampons for the 1st time in their life, so give them a break for pulling that hard on the rope... The station is on top of the island in the background.

Left: The doctor on top of an easy iceberg. It was not very steep, about 60° max, but the ice was extremely brittle.

Iceberg ice is the worst I've seen in my climbing experience. That's because this ice comes from snow fallen millions of years ago in the center of Antarctica. It then went deep underground (up to 4 vertical km of ice in the center !) and the air naturally present in the snow got compressed to tremendous pressures (up to 400 atmospheres !). When the ice finally gets out of the glacier in the form of icebergs, the air bubbles are still at the same pressure. The slightest shock can release all of it: it just goes 'pang!' and the block is transformed in a pile of broken crystals. Very impressive if you are walking on it with crampons (it's like walking on crystal glasses), even more if you try to hammer an ice axe or screw in !!!

Right: GrosDom on top of an easy snow iceberg.

On those, the ice is much more recent and looks like packed snow. Usually good for climbing, as long as it doesn't get too steep. Climbing iceberg if a very good way to stay in shape in those long Antarctic winters: long approaches, deep cold, scary ice, short but pretty intense routes... what else could you ask for ? No, seriously, they make for good pictures, and only getting a little above the ground provides wonderful views.

This 'berg was horizontal not too long ago. It tipped over and the snow fallen on its flat icy slope now provides an easy access to the top. I don't know why, but recent icebergs always have vertical sides. Once they start collapsing and rolling over, they can take plenty of different shapes. Also the 'bergs are active only in summer: they move around, tip over and roll over... In winter we never saw them change. I don't think one meter thick of sea-ice is enough to explain the stability of all those enormous icebergs. What I think is that the sea-ice slows down the sea currents considerably and those are, in summer, responsible for moving the 'bergs around.

Left: Here GrosNitho at the entrance of a cave inside an iceberg. There were many of those caves, some unstable with blocks fallen from the roof blocking the entrance, others quite smoothed up by the summer sea. Those caves are probably crack enlarged by the sea in summer since they all seemed to be at sea level.

Right: GrosNitho on top of a pyramidal and easy iceberg, looking towards the station of Dumont d'Urville, far out on the island. One more of those 'bergs that could be climbed without particular gear. I even managed to do one with cross country skis, although it was a bit steep. 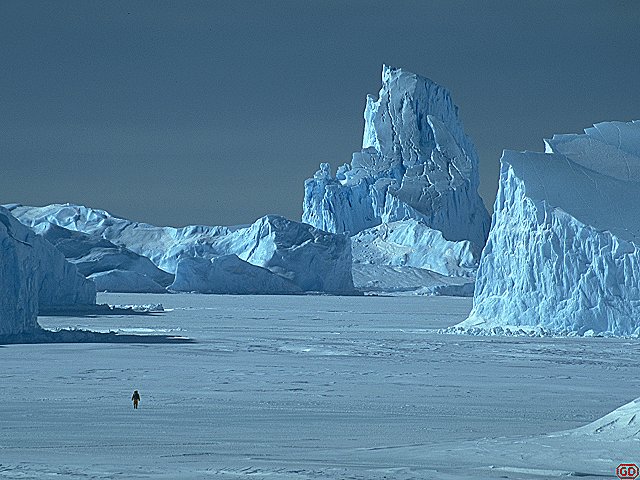 Left: The highest, hardest and last iceberg Grosnitho and I climbed

This tall one (120m) was the 16th and last iceberg I climbed. The ascent was completed with Grosnitho on November 4th, 1993. First we walked 2 hours on sea ice to reach it. Then we went inside the obvious crack in the center, one pitch easy snow, then a short vertical pitch (15m) in very bad ice, brittle like crystal on the right side, soft snow holding ice blocks on the left. Impossible to protect. It took me an hour to dig steps... in vertical ice ! Or it's more accurate to say I carved hand holds... Then we were inside a wide crevasse (visible) and had to go up a chimney (just like in good old Yosemite, except that here I was doing axe-jams !). Then there's 50 more meters at 40° to the summit. Took us 4 hours to get up. [Purchase the poster]

The full story is longer than this. About a month earlier, the doctor (see above) had started to blow a fuse. To make a long story short, we had to put him in a straight jacket and watch over him for the whole time. The Astrolabe was scheduled to arrive only in December, but the Australian agreed to reroute their supply ship, the Aurora Australis, to come pick him up. In the meanwhile, since we had no more usable doctor, the station leader forbade all dangerous activities, including climbing, which I agreed to.

On Nov 4th, the Australians were about 160km away, blocked by the pack of sea ice. They sent 3 helicopters with a new doctor and some fresh salad and tomatoes. On that same day we took off for our long postponed climb. On the way we broke the antenna of the radio and we could hear people calling for us, but they couldn't hear us. We came back cold, exhausted and in hiding during the night... only to find that everybody was looking at the leg crossing of Sharon Stone since the Aussies had given us the tape of

Basic Instinct ! The boss waited for the end of the movie before chewing on us...

Right: Here I'm just at the start of the crux, during a first attempt a couple months earlier. There are vertical needles of ice all around, looking rather unstable. Well, not that much since we used one to rappel on ! OK, I won't do that again, I swear.

We did this climb just in time, because 4 days later the wind rose, broke and carried the sea ice away. After that we were stuck on the island: no more happy hiking on the sea-ice, no more 'berg climbing. It was time to head back home.

Then a decade and a half later, watching a parody video in the middle of the 2008 presidential campaign, I'm taken aback to seen that they've used my picture as a background for Alaska. Obviously without asking for permission, but that was pretty funny so I guess that makes it OK, right ?

If you want to learn a lot more about Antarctic climbing, there's a recent book listing all known ascents: The Antarctic Mountaineering Chronology by Damien Gildea; A list of first ascents of mountains in Antarctica, 1817-1998. Published by Damien Gildea, Australia, 1998. ISBN 0-646-36129-5. Available there.