Many little villages in central italy have maintained interesting traditions. Here in Bacugno there's a couple of traditions that relate to old fertility rites and predate the christian church by a long way.

Left: 'The poets'. In the antique olympic games there used to be poetry contests. I always wondered how it must have been possible. Here's an example where they are given a theme and take turn improvising in public.

Right: On board a tractor bringing up the volunteers. Departure at midnight, or much later depending on the tractor and the inebriety factor.

Left: A tree is fell and leaves are collected.

Right: Walking towards the summit of Mt Boragine ('La Scarpa' as it is locally known) with tree leaves.

Left: Dawn in the cloud on the summit. Rain is not far off.

Right: Preparing the support hole for the 'Biffa' (pole).

Left: Bringing the new pole in.

Right: Leaves are tied to the pole.

Left: The pole is raised and attached with lines while onlookers are hiding from the rain and the wind.

Left: In the small village of Vetozza, the 'solcatori' are given breakfast, and can even pull off a dance if they still have the energy.

Right: Taking a break before the rest of the walk towards Bacugno. 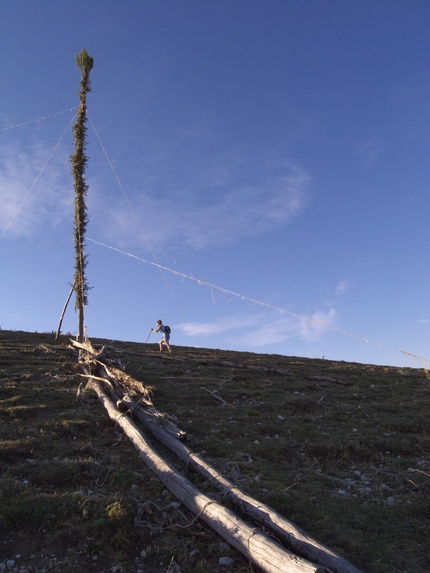 Left: The 'Biffa' once installed right below the summit.

Mt Boragine is actually a nice summit to do with a mountain bike.

Kneeling of the bull

Left: A Madonna is later walked around the village in a procession... 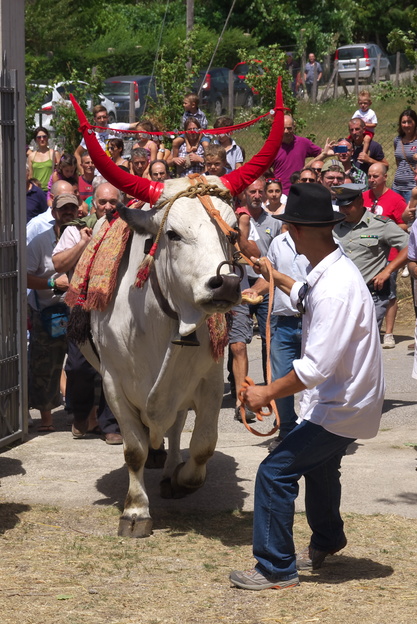 Right: ...along with a much less christian white bull. 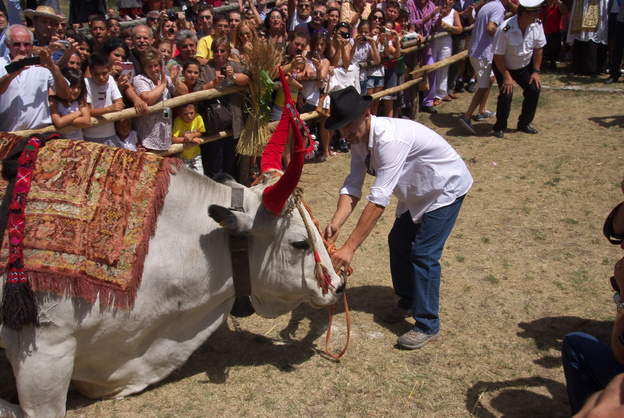 Left: And the bull is made to kneel in front of the church building with crowds watching.

The submission of old pagan rituals to the church is very obvious here, indeed this ceremony is called 'the obsequious bull'. Bulls were symbolic in all bronze-age mediterranean cultures and are still involved in some places such as the spanish corrida, the running of the bulls in Pamplona, etc... 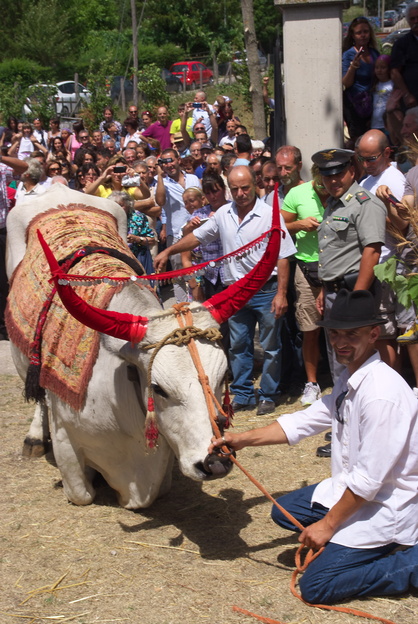 Right: The white bull kneeling in front of the crowd... and the church.

Right: Young girls throwing donuts to the public. Yet one more fertility ritual dating to a neolithic past ? The village takes it name from the Vacunea goddess.

Left: The donut throwers taking their job at heart.