"Pissing through 6 inches of clothes with a 3 inch penis"    — Anonymous Everest summiteer when asked what was the hardest thing about climbing Mt Everest.

Those are some hilarious posts/trolls I found in the rec.climbing newsgroup. Enjoy.

my friends and I have been climbing in a local gym for about a year, and are planning a trip to yosemite this summer to climb el captain. we have a few questions about gear, and thought we could get them answered in cyberspace!

thanks for the help in advance, but please kind of hurry up, cause we're leaving in a week and a half.

Gsann (gsann@aol.com) wrote:
: I am currently working out so I can climb CO 14ers. Does anyone have any
: tried and true workout techniques that make altitude climbing less
: enduring?

I suggest going out to the nearest pub and getting completely, and utterly, wasted. Make sure you smoke at least 1 pack of unfiltered Camel's. Get the full ashtray, pour a drink in it and then pour the mixture into a water bottle.

When you get home (ideally around 3:30am) stick the vile mixture into your freezer. Put on your best goretex and thermal layer. Climb in. At 5:30am, get out, drink (chew?) the mixture and go run the biggest flight of stairs you can find. Run until your heart threatens to explode.

Your dehydration caused by the alcohol should adequately simulate what you may experience at higher altitudes. Your lung capacity should be sufficiently impaired by the smokes to simulate a oxygen poor environment. The freezer episode should adequately replicate a bivy. Drinking the booze/butt mixture should simulate your lack of appetite.....

Oh — once your finished your workout, go to work (to replicate the long walk out). 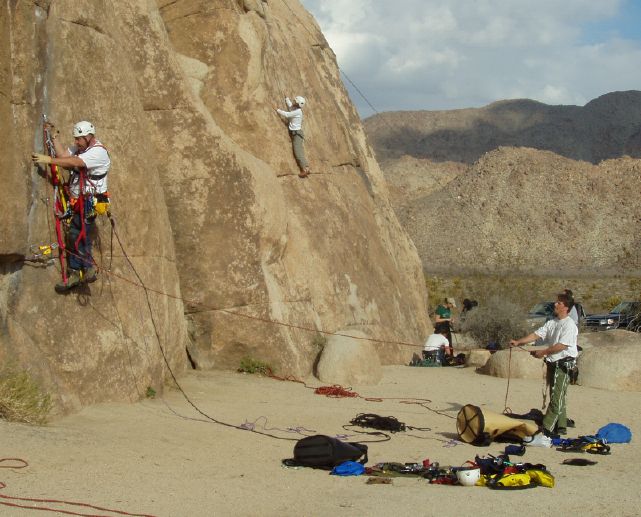 We saw these two guys at the Short Wall in Indian Cove this Saturday. They were aiding Right V Crack. It's a 3-star .10c leaning thin crack.

This was the scene ALL DAY. They got up a maximum of 12 feet, before the belayer would say something to the effect of "your gear sucks, come on down". At this point they would down-aid, trade places, and the process would repeat.

These guys continuously harassed each other with advice. For instance, the belayer, standing where he is in this picture 20 ft. away told the climber to place the nut in the other direction (ie. curved side to the right instead of left). How he could see the correct orientation of the nut placement from that far is beside me.

Notice the two screamers on the bottom two pieces which are no more than 3 feet off the ground?

BTW, the climber in the pic outweighs the belayer by at least 100 lbs.

Luckily they never made it higher than 12 feet in 4 attempts. The big guy had 3 pieces (not consecutive) pull while he was standing on them. The little guy only pulled one piece in 12 feet.

Anyway, that was my entertainment this Saturday. Thought I'd share.

More climbing humor at: You might be a mountain climber, why climbing is better than sex and the climbing quotes.