Most of the horizontal panoramas have a bigger version. Click on the images to see the full version inside another window. Press [F11] on that new window to see it full screen.

A panorama of Concordia taken during the winter, based on a single fisheye image unrolled into a panorama with a specific program. Antarctica, July 2005.

A panorama of the midwinter party room, based on 6 180° fisheye images unwarped with a specific freeware. Antarctica, July 2005. I have a whole separate page with panoramas from inside and outside the station.

Panorama of Concordia after the sun has gone for good, Antarctica, May 2005.

A 360 degree panorama of the Ecrins Range, near Briançon. Visible from left to right: the Guisane valley (Briançon), les Agneaux, the Pelvoux, la Barre des Ecrins (large summit in background), la Meije (large mountain in foreground), the valley of La Grave, the Lautaret pass, the hills behind the italian border. France, 2004.

Panorama from the summit of Moses Tower, Moab, Utah, 2002.

Panorama from the summit of the South Six Shooter, Utah, 2001.

Panorama of the Sister Superior and Castleton towers, Moab, Utah, 2002.

A 360 degree panorama taken from the intermediate camp before the Cho Oyu base camp.

A 360 degree panorama taken from the Cho Oyu base camp. Cho-Oyu is visible on the right of the big hill that dominates the camp. Himalaya, 2000.

A 360 degree panorama from the summit of Longs Peak in winter, Colorado, 2001. Visible from left to right: Mt Lady Washington (with Estes Park in the background), Mt Meeker, the Rocky Mountains range, the summit plateau, the RMNP range with the Mummy range in the background corner.

Panorama of Estes Park and Longs Peak from Lumpy Ridge, 2003.

Panorama of the Colorado River and Wall Street, Moab, Utah, 2001.

Panorama showing the morning light on the start of the descent into the South Kaibab trail, Grand Canyon, Arizona, 2002.

Panorama of the Colorado river near the bottom of Grand Canyon, Arizona, 2002. 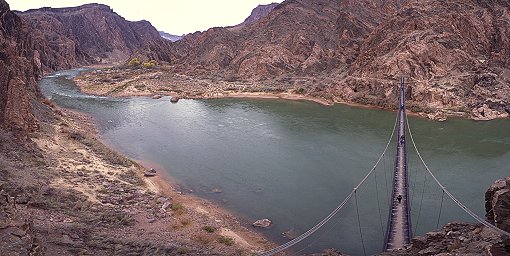 Panorama of the Colorado river at the bottom of Grand Canyon, Arizona, 2002.

Don't miss the vertical panoramas which are now on a separate page of their own...