Climbing on the Vercors plateau

Late June 2008. I have a week of work in Belgium doing satellite testing and trying to figure out system bugs in a system I've never even seen before. 18 hours a day, with just a few minutes tossed in to appreciate the local beers. I come back wasted on friday night and I'm supposed to have a potentially life-changing full day job interview on monday after yet another plane ride, where they told me in advance 'to come well and rested', whatever that means... So Jenny is like, ok, let's go do a short route. Just 3 pitches of 6b, the rest being grade 4 or 5, it shouldn't take too long. So we start in full confidence at mid-day, also to avoid the scorching heat on this east face.

I open the guidebook for the first time at the base of the 'Fissure en arc de cercle' below the Gerbier crest: "This is where famed climber Lionel Terray died falling off the top grassy slopes". Puts you right into the mood.

Left: Crux move on the Couloir en Virgule. As I grapple desperately to the fragile saplings for lack of better holds, I feel a sling underneath and pull cautiously on it... until I can use it to drag myself up. Good thing I was being cautious as it is neck-tied to a pair of pitons hammered together into a flaring hole. Of course for Jenny I remove it to see how the move is supposed to be done. Can you believe she yelled at me afterwards when she found out about the sling ?

Right: Side view to the north of the Gerbier with Grenoble at the bottom of the valley.

Left: Jenny at the end of the last and most strenuous pitch: a long tiring crack that turns into a sequence of roof moves on slopers. Well protected but I came out of it wasted: not enough sleep and too much beer during the week. The upper pitches are easy but the rock is not so good and a few large rocks tossed by mountain goats whizzed by way too close for comfort.

Right: Summit of the Gerbier, already quite late in the evening. Now there's one km of ridge traverse with a few technical moves. We remove the rope after 100m as it's only good to waste time and drop rocks.

Right: The narrowest part of the ridge, and very exposed on both sides. Some moves to remember while we hurry to beat the sunset.

Left: Last technical move before the trail takes us back to the car. Just in time as with only one headlamp for the two of us it would have been dicey doing those exposed moves.

Right: The Gerbier ridge as a whole, seen from the 'double breche', where the trail heads back down to Prelenfrey. Strangely this trail is gone from newer maps. The Grand Veymont, highest summit of Vercors, is visible on the right while the Mt Aiguille, the most famous one, is far on the left still bathed in sunlight.

So how did the job interview go after coming back in the middle of the night from the climb... Unfortunately I'm not allowed to say, having had to sign an NDA about it. Well, I'm blogging about it privately so far and it may end up on my blog at some point in the future, who knows.

Above: Panoramic view of the west side of the Gerbier at sunset. nice but much less impressive than the east side.

Left: Climbing on a minor cliff with a great view on the Devoluy at Gresse-en-Vercors. 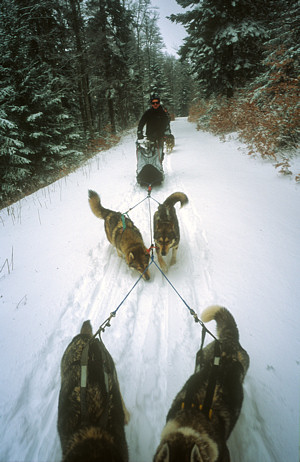 Other activities in the Vercors

Left: Mt Aiguille, considered by many the birthplace of climbing after its first ascent in 142 by Antoine de Ville under orders from Charles VIII. I can imagine this nowadays, being ordered to climb a 5.14 before the end of the month...

Right: Kids going on a dog sled ride in the remote south Vercors.

Right: Corrençon, a friendly sport cliff on the plateau of the Vercors. The lower cliff is not that impressive but the top one, although harder, is well worth a visit if only for the view.

Right: There used to be a village on the left of the image. It was razed by a Nazi commando during WWII and all its inhabitants pulled from their beds and executed. Nobody lives there anymore, only a church stands watch to the atrocities of the past.

Left: The Chabrinel hut at the southern end of the Vercors. We got there after a day of biking through the entire high plateau. Only one hour of daylight left, what should we do ? There are 3 guys and a nice fire going on inside, but it's a short descent to reach a hotel at the Rousset pass...

Right: Going down towards the Rousset pass.

Left: Unfortunately when we get there everything is closed for the season ! We have to bike another 17km before we can find a restaurant and accommodation, exhausted.

Right: Bouldering at St Nizier, a lovely spot for an after-work outing. Unfortunately there isn't a huge quantity of boulder problems.

Left: Mountain biking through the woods of the Vercors.

Right: An old wooden trough seen while mountain bike in the south Vercors, near Pré Peyret.

Left: Glider above the Gerbier.

Right: Grande Moucherolle and the lake below.

Right: Shadow of Jenny while on the pillar.

Left: The cliff of Lans-en-Vercors is known for its sport climbing, but the there's one very nice 4-pitch route of a moderate level, easily climbable in two long pitches.

Right: Last move on the route

Left: Reaching the summit of the pillar, with home in the background.

Right: Rappelling off the pillar.

Right: Incredible leaning pillar against the cliff of Glandasse. That thing is about 200 meters high.

Left: Jenny on the Prince-Ringuet route, an old classic with a dicey, runout and somewhat loose first pitch, but the rest is quite good.

Right: Some grass on the easier pitches.

Left: Leaning flared chimney, not as hard as it looks.

Right: Jenny on the upper part of the route, quite high above the village of Romeyer.

Left: Summit of the route, with the leaning pillar still standing...

Right: Walking on the Vercors plateau, heading for the long descent.

Left: Agostino at the end of the aid part of the 1st pitch.

Right: Agostino on the higher slabs.

Right: Upper part of the route.

Left: End of the route, there's only some easy scramble from here on.

Above: Panorama from the summit of the Deux Soeur: the Grande Moucherolle on the left, the Gerbier on the right.

Right: After the 'two sisters', the '3 virgins'... A famous view from Grenoble and even more so from the road leading up to St Nizier.

Left: Although it's a big rock, there are few interesting routes on it. Most routes are ancient aid garbage on pitons that have long rotten away. The Grange Couloir is the one notable exception: about 10 pitches of 'classic' grade 4 on good rock, here we climb it after work in plastic boots in less than 2 hours car to car.

Right: The final pitches are the steepest, and if you want a dare, you can do the original version of the last pitch instead of the left hand more modern variation. It's aptly named the 'sandwich crack' and will eat you up...

Right: The Gerbier ridge seen from the Cornafion.

Above: Panoramic view of the Belledonne range.

Above: Grenoble seen from the Arc col.

Right: The seldom climbed cliff of the Arc pass.

Left: Climbing half-barefoot at the Arc pass. Yeah, that's what you do when you forget a shoe at home.

Right: One of the hidden jewels of the Vercors, those two routes above Meaudre, with only 10 minutes of approach and some excellent pitches like a fabulous 50m pitch of 6b slab on pocket limestone. Here climbing the 4-pitch west-facing route in the after work sunset.

Left: Summit of the Gonson rock after sunset.

Traverse of the Vercors

Right: Sunset while at a bivouac near the Pas de Balme.

Left: Sunset on the Vercors.

Left: ...and enjoying the sunset.

Above: The Vercors ridge with the Mt Aiguille in the background.

Above: Panorama of the Devoluy, Triève, Mt Aiguille and east side of Vercors.

Right: East side of the Vercors, Grande Moucherolle in the back.

Right: The plateau of St Julien as seen from the Vierge du Vercors, a minor cliff.

Right: The Gerbier seen from the south, Grenoble in the background.

Right: The south side of Gerbier and its good looking rock.

Left: Autumn on the Vercors plateau.