Climbing in the Apennines

"I looked back at the summit of the mountain, which seemed but a cubit high in comparison with the height of human contemplation, were in not too often merged in the corruptions of the earth."    —

Petrarch, Italian Poet, on the summit of Mt Ventoux in 1335.

The Apennines are a long range of mountains going throughout Italy, almost reaching the Alps in the northernmost part. Most of the range is little more than high hills, but I have long had a page about Gran Sasso, the highest summit of the Range and great playground for all kind of climbing activities. Here I want to add a few pictures of various other areas in central Italy, not necessary limited to the Apennines themselves. I'll add new pics from my archives as I sift through the stocks.

Left: Down the rappel line common to most of the routes.

Right: The traverse right above the sea leading to most of the classic routes.

Gaeta is far from the mountains, known as a place to visit, enjoy the sea and eat its fresh mozzarella cheese and seafood. For climbers the preferred destination is usually Sperlonga, a few km farther north, but Gaeta provides a lot more adventure on its sea rappel, its 5-pitch routes and its rusty pitons. Located halfway between Rome and Naples, if offers good winter climbing but is too hot in summer. 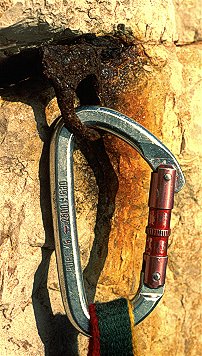 First time I went to Gaeta I had precious little info. With Vincent who was coming down from Paris for a few days to discover Italy we climbed the super classic Croce del Sud and then, having some time to left, we decided to do another route in a different area, not knowing that it was an area now closed to climbing. Looking from above we could see a line of pitons coming up. We do a first rappel to an old belay and then right by the sea. I start the first pitch only to find a rusty old pitons. On the Croce del Sud they had nice stainless steel bolts... Then another one, with a long line of rust coloring the rock below. When I get to a pumpy overhang, the piton is even uglier. I decide to test it and yank the quickdraw. The piton just snaps off... I finished the 5.10 pitch shaking like a leaf, already imagining a fall 30 meters into the cold water below.

Indeed some people have had to retreat from the cliff by swimming to the nearby beach or by hitching a ride on a fisherman's boat. The rock is a sharp limestone, with routes placed close together, so routefinding mistakes are common.

Left: The beach of Sperlonga and its very popular cliffs, particularly in winter. The parking is at the mozarella shot on the 1st exit on the left after the tunnel.

Right: Coming down Pizzo di Cevo in the spring, a classic peak in the Monti della Laga.

Left: South of Gran Sasso, the Maiella has some excellent couloirs.

Right: A frozen cross on the summit of Mt Velino, one of the quickest summit to do from Rome.

Left: Capri island is a major touristic destination, and it also offers a bit of climbing, like on those two 'faraglione'.

Left: The wilder Monti Sibilini have more difficult access, many ancient legends about them and some seldom done rock and ice climbing. Here Enrico Bernieri traversing a long ledge to reach a route.

Left: Tonino showing off his no-hands technique on a 6c friction slab he opened himself at Mt Dei Fiori and on which I fell earlier. Yeah, yeah, yeah, but your are top-roping here.

If you want a lot more information about central Italy, you can look at the website of my friend Tonino who has done quite a few first ascents there.

Right: Crossing a field of Rumex, chenopodium, thistle and nettle, all connected by large spiderwebs. They are all edible (excluding the spiders).

Left: Removing a needle from Jenny's finger with a sharpened Swiss army knife. Well, maybe not so well sharpened after all.

Above: Summit of Mt Ghiaccio Porcelli ('Icy Piglet' !) in Monti della Laga, with Gran Sasso visible in the distance.

Above: Panorama of the Sebastiani hut... where I met Jenny long ago.

Those slabs were rediscovered recently and now host dozens of bolted routes from 2 to 5 pitches, but the bolting is rather sketchy. On my first route, there were 4 bolts in short succession on 6b, then 2 pitons, then nothing but a threaded sling for the next, fortunately easier, 40 meters. We have no information on the routes, either names or level, only knowing they've been opened by Paolo Caruso, so we try and climb them at random.

Those were among the first images I took with my new camera, the Panasonic DMC-LX3.

Right: Tonino on an overhanging slab, seconds before breaking the glued-on hold. He's a purist but didn't do it on purpose.

Left: Placing a cam after a long runout on easier ground.

Right: Tonino on the summit of the pillar, with the altipiano of Castulluccio di Norcia below.

Left: The 1400m high Calstelluccio di Norcia altipiano, famous for its lentils and its paragliding.

Left: The same route as where Tonino broke the added hold, seen from a different angle.

Right: Tonino and Guido on a beautiful pillar.

Right: A view of the cliff. The 2-pitch routes and on the right part and several longer routes start from the obvious pillar in the center.

Left: Antonella on the last 'feet only' moves of the 5th pitch of one of the longest routes.

Right: Hiking back to the parking lot after the long day: 1h30 to reach the base without a trail, 9 pitches on unknown grounds and plenty of fun.

Right: Plethora of sheep on the start of the trail.

Left: First view on Pizzo del Diavolo from the pass.

Right: Pizzo del Diavolo. The route follows the most obvious crack in the middle of the face.

Right: End of the crux pitch: 50m of licheny 6b dihedral with scarce protection.

Left: Tonino starting one of the upper pitches.

This is a route that has seen few repeats over the last 20 years. The rock is good in the difficult sections, but not so great outside... Excellent view on the tiny lakes of Pilato that house the unique crustacean Chirocephalus marchesonii (a type of fairy shrimp).

Tonino's pictures (and complete route description) are here. It's also possible to bike down from the summit and from Forca di Presta as described here.

Right: A year later, approaching the Pizzo del Diavolo for a 2nd climb.

Left: That's me before flying off.

So a year later we come back to the same cliff for another route. This time won't turn out so well. The first pitch turns slabby and very difficult. There are only a few tiny finger holes on a vertical slab and below me I have a piton at 15m and a tiny alien placed upside down in a tiny notch well below my feet. I place a good skyhook and step on it, not bothering to put the rope in. Then I place a second one, step on it as high as I can and just as I'm about to reach a good flat hold and resume free-climbing, it blows. As I fly I grab by miracle the sling of the other hook below... and it holds. I've fallen only 2 meters but I was looking at more than 10 more... if the tiny TCU had held. I'm a bit shaken but manage to try again and place the hook again in another hole since the previous one is broken and I finish the pitch.

Right: Tonino on the hard slabby section where I flew off.

Left: Right before falling again on an overhanging section.

Two pitches higher there's another difficult section with an overhang. There's a piton underneath and an irregular crack in the middle. There's also a bolt a good meter above. I battle for several minutes trying to poorly place a cam in the crack and I step on it cautiously. It blows immediately and I fly much further than expected. Indeed I land on Tonino at the belay a good 15 meters below. The piton has broken clean off ! I'm a bit scrapped but resume the action, placing two new pitons and reaching the bolt. The next pitch will be my mental undoing: I'm looking at 50m of traverse on rotten rock and I can see only one rusty piton at the beginning and I don't even see where the traverse takes me. I melt down and we back off. Too dangerous for my taste, two bouncy flights are enough.