"The most important event of 1492 is, of course, the first ascent on Mt Aiguille in Dauphiné."

Left: West face of Mt Aiguille as seen from the Aupet pass in late afternoon.

Right: The summit of Mt Aiguille with the Meije visible in the far background.

The Vercors plateau is one of those semi-legendary mountain places where weird stories mix it up with tales of heroism. This is where famed climber Lionel Terray fell off. It's where the french put up the strongest resistance to the Nazi during the entire occupation, to the point that the occupiers sent paratroopers to raze entire villages, inhabitants included. This is where climbing was born while Columbus was sailing across the Atlantic. This is where roads get carried off in landslides so big that they don't get rebuilt. This is where tunnels get appropriated by ravers for all night parties. This is where tourists can get lost and walk for 3 weeks before getting back to civilization.

Left: Mt aiguille seen from the Selle pass upon reaching the Vercors plateau itself.

Right: Very high resolution image of the sunset on Mt Aiguille, birthplace of climbing 5 centuries ago.

Left: Mt Aiguille as seen through a gash in the ridge of Parquet on the edge of the Vercors plateau.

Right: Alpenglow on the west face of Mt Aiguille.

Seen from Grenoble or from the west, the Vercors looks unreachable thanks to a continuous cliff blocking access to the plateau itself. And indeed from Grenoble you have 2 roads at the very north, and then nothing as you go south until you completely reach the other side, a good 100km farther. Just like the Chartreuse the main summits are not very high: 2346m for the Grand Veymont, 2284m for Moucherolle, 1901m for the Moucherotte right above Grenoble... Half of the plateau has no road making it a haven for hikers and mountain bikers.

Left: Moon crescent and Venus on the edge of the Vercors ridge. 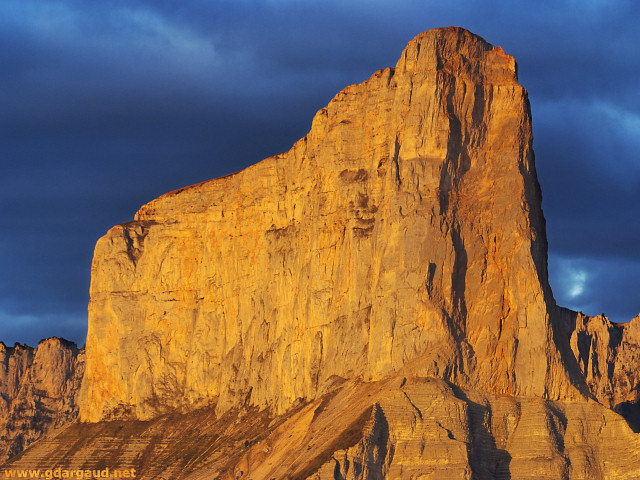 Above: Panorama taken from the edge of the Vercors plateau showing the Grand Veymont, highest summit of Vercors (2341m) and the distinctive Mt Aiguille (2087m). Grenoble is in the haze in the background between the two summits and the Devoluy is the range of mountains visible on the right.

Above: Morning panorama on Mt Aiguille and Grand Veymont from the summit of the Goutaroux.

Above: Mt Aiguille seen from the Parquet ridge in fresh snow.

Above: Mt Aiguille in the snow, separating the Taillefer (left) and the Devoluy (right).

So this is one of the most famous mountains in the world, we live next door, and after 4 years we still haven't climbed it !?! Well, since the weather this WE is not up for the intended climb we head for an easy route on the quintessential mountain: Mt Aiguille, on the east side of the Vercors. After an hour walking up the trail in thick fog we can see the top of the mountain in the sun, but the route is on the west face and exposed to the cold winds at the pass. We head for the south face in search of something else, but the rock doesn't look all that impressive. Back to the west face where I start the route but have to warm my hands at every step. After 15 meters I come back down and we return on the south face.

Right: End of the technical section on the route and top of the Gemeaux tower.

We start on the Student route, a few unstable blocks on the 1st pitch, a better 2nd pitch but then I veer off route, and up in steep wet grass and loose dirt. It's getting late and we bail. Back to the west face where by now it's much warmer. We start yet again on the route, taking barely more than an hour to do the 5 pitches in 3 long ones, but then there are about 4 more long pitches of easy terrain with a couple moves to negotiate quickly, better in hiking shoes.

Left: We play hide and seek all day with the clouds. The Grand Veymont is behind Jenny.

The route we've climbed is between the normal route and the descent. I knew about the km long flat summit, but it's still an impressive sight, thinking that this plateau was reached over 5 centuries ago by Antoine de Ville.

Right: It is said that in 1492 they found some animals on the summit, which seems incredible nowadays looking at how steep it is all around, but some ledges have probably fallen since then.

Left: The Devoluy seen from the summit of Mt Aiguille.

Right: Shadow of Mt Aiguille on the Triève, pointing in the direction of Belledonne.

Left: About 1km long and rather flat, the summit is regularly skied...

Above: Panorama of the east side of the Vercors, with Grand Veymont dominating the view.

Left: Preparing the rappel on the descent.

Right: Long rappel between the towers.

Left: Evening shadows extending on the west side of Mt Aiguille. The route we climbed if slightly to the left.

Right: Heading with Franck to climb the centenary route on the east face, we completely fail at finding it, instead climbing several false starts in steep shit rock.

Left: So as it's getting late (hah!), we end up on the Gemeaux tower again.

Right: The crux of the route: a polished overhanging crack, but only a few moves.

Left: End of the steep section with the Grand Veymont in the back.

Left: Higher on one of the many ledges of the route.

Right: The west face in the evening. This was early in the season, in early April, so can you spot the snow at the bottom ? What you can't see is that there's also snow in the hidden descent gully...

So what's the story ? When we get to the summit, there's another party of 4 already on top, looking very relaxed: they offer us wine, pastis and what I can only guess is pot. As it's already 16:30, we stay only a few minutes and head back down, telling them that there's snow in the descent gully, so they shouldn't waste too much time. And we head down.

At the parking lot there's only one other car, but it has only 2 seats, so it can't be theirs. There actually was another party of two that reached the summit shortly after us. We eat and sleep at the parking lot and just as we fall asleep we hear the car come down. But with the first light of morning, we hear the familiar buzzing of a helicopter hovering around the tower. We can already guess what happened...

Left: The south face of the Mt Aiguille as seen from the parking lot.

As we drive back down to Richardiere (the first village), we see the helicopter come right down there and stop in front of the bar (yeah, apparently they have normal parking, handicapped parking and helicopter parking). We decide to stop for a coffee and a bit of gossip with the pilots. Yup, they got called during the night by a party of 4 that got lost in the descent due to the snow. They'd just air-dropped two guides who were taking them down. The night hadn't been too cold so they were still in good enough conditions to walk down.