PhotoShop, blackmail pictures no longer have to be real to look real."

The contest is over and we have... two winners. I shouldn't have set a deadline on a saturday: I now have a pile of emails of people asking: 'So what is it, what is it ? You are late...'

So the first winner is Peter Bakke who made the following deduction:

1 — They're not generated from an algorithm, unless you're remarkably good at programming organic algorithms, and in any event, even if you were good at that sort of thing, I'm not, so I couldn't tell you what it was. :)
2 — I don't think they're auroras — they're too symmetrical, and I've never seen any so intensely red, or of without any variance in color.
3 — LSD? uhh, no. :)
4 — I've accidentally stuck my fingers in a light socket, so I know it's not that. ;)
5 — Because the color is so pure, I suspect it's from a man made / filtered light source — like a red LED, or laser.
6 — Not all of the pictures are monochromatic — the upper right hand picture has a purplish corner, which means you didn't shoot through something like a red 25 filter.
7 — The uneven horizontal symmetry of the patterns is similar to what happens with reflections from within a column of water. Say, a glass of water.
8 — There don't appear to be any out of focus highlights that give away the aperture shape in the camera, so it's in focus, whatever it is.
(insert drum roll)
9 — So, my guess is that it's a bright man-made red light source (probably a laser), shining through something similar to a glass of water, projected on a wall in a dark room. The different shapes could be from different orientations of light source and water "lens."
10 — The blue glow in the corner of the picture may even be from a computer monitor. :)
How close am I? :)

Very close indeed: right on 1-2-3-4-6-7 (very good)-8. It's not a monochromatic light and I can't be sure about the computer monitor (which was nearby), but I suspect it's more likely to be the window.

Then a while later, Hunter Hubby sent the following much terser description:

Beautiful candlelight through a warm and wonderful glass of red wine

Right on target... Except that it's the sun and not a candle (way too weak) and, just like in Peter's description, there's some important element missing: there's no lens !

So here's is the official answer: "Those are pictures of a glass of red wine (Bordeaux Chateau Latour 97, you can actually recognize the shape of the glass on one picture). Let the low sunset shine through it and observe the table on which the glass lays: there are strange optical effects, like a bad quality lens trying to focus the sun on the table. Now remove the table and place a camera at the same spot, without any lens (the lens is the glass). Let the exposure on Matrix + Automatic (there's no aperture) and shoot like that. The result is identical to what you'd get if you took a normal picture of the table, but it's much easier (and as Petter said: 'it's in focus, whatever that is'). So there I was, holding a glass of wine with one hand, the camera underneath with the other, checking the result through the viewfinder and drinking any overspill."

On the last two pictures I took after the contest was over, I used water in a glass with a different shape. You can see some 'rainbow' effect due to the fact that the different wavelengths constituting white light get refracted with different angles (a phenomenon discovered by Isaac Newton). When I used wine, only few wavelength made it through the glass (red) so this effect didn't show (otherwise it would have been too easy).

Left: What it says: 'Parco Nazionale della Maiella. Patrimonio Naturale e Culturale. Comune di Sant'Eufemia a Maiella'... What you see: trash ! But it's a nice place to hike and ski, higher up where it's still clean.

Right: Scary rusty pitons while climbing in Gaeta, on the coast between Rome and Napoli. Falling there may not be as deadly as it looks 'cause you fall right in the water... But then you have to swim back to shore (one km) or hitch a ride from one of the many fishing boats.

Left: Some of the thousands of toilets installed all around our research center for the Pope (august 2000). I'm sure they are multiplying all by themselves, see, they are spraying water on them to make them grow !

Right: A broken Ferrari being towed on the road near Ascoli, Italy.

Left: A cow shopping for some rolls of film, Nepal. 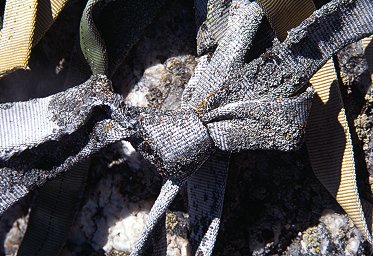 Left: In the same category as the rusty piton above, here's the sling that's being held together by lichen. Nice for rappelling off the Grand Teton...

Right: Bursting a balloon with a sound trigger connected to the flash. The humidity contained inside suddenly condenses when the hot humid air inside suffers a sudden pressure drops.

Left: Different way of popping a balloon: blow in it till it blows... Notice the way it shreds ? If you pop a balloon in the dark, you'll sometimes notice a flash: it's static electricity.

Right: Happy dog bringing a piece of rotting animal back for dinner. Feel the power of dog breath for the next 2 days... 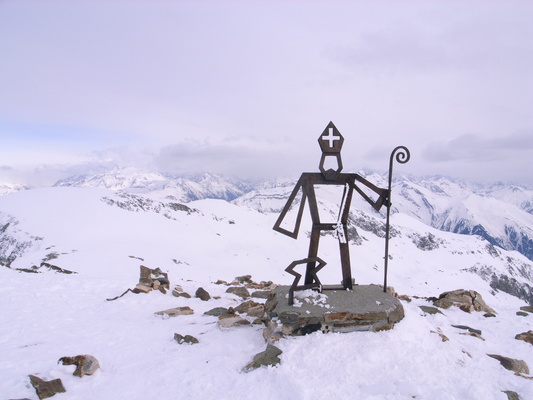 Left: A pope (or is that a bishop ?) on the summit of the Taillefer. Now I don't mind a cross or two on traditional summits just to say 'you are here', but looking at this ugly piece of metal (an attempt at humor maybe) I understand why some people now go hiking in the area with a metal saw (true). I don't know what we'll see next but please keep your religion out of our mountains and I won't bring my ice axe into your churches.

Right: Did board #48 FAIL while the painter was on it ? Mystery. Image taken on the island of Telendos.