"I was in the supermarket where I saw a sign that said 'pet supplies'. So I did. Then I saw another sign that said 'compact cameras'."    — Based on a Stephen Wright quote..

Note 1: The headers with a grey background are the equipment I currently use. The rest was sold, lost or destroyed in a rage years ago...

Note 2: Rating from [0] (Bad, really bad) to [*****] (Great, truly great). Some stars may be between parenthesis to mean a general purpose use vs a very specialized niche use. For instance an 8mm fisheye may get *(**) to mean it's not very good for general photography but good for assembling panoramic shots and other specific purposes. Also the ratings refer to the time when I was using them. If the title is not in gray background, then it's obsolete.

I'd had the LX3 (see below) for barely a year when, on Jan 2nd 2011, I pulled it out of its cushioned bag to take a picture and saw a cracked screen and a crushed trigger. I'd used it the previous evening and I have absolutely no idea what may have happened. So after a bit of googling I settled on the upgrade of that model, the LX5. The differences are few but important: 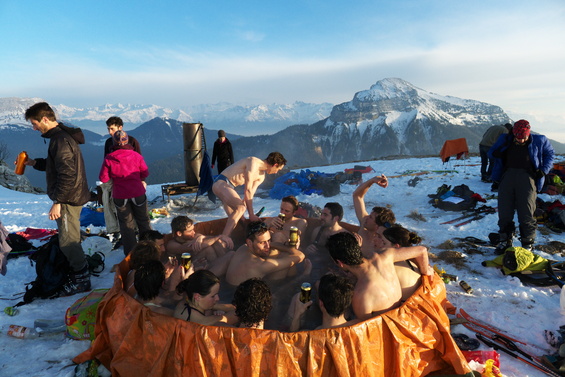 Right: One of my first images with the LX5

Wanna see the first pics I took with this camera ? So is it a better camera ? Well, it should very well be, but there are 2 hopeless issues with mine. If you have the LX3, is it worth dumping it to get the LX5 ? Well, I'm not so sure about that one...

Problems: In particular I get some horrible banding on the right side of high contrast images. Take a look at those and let me know what you think:

And the 2nd VIP (very important problem) is that some images have one side completely out of focus. This can only be caused by the lens being set in position asymmetrically. And if this happens, then the design of the lens sucks.

In 2009 my requirements for a compact digital camera for climbing photography are the following: same amount of pixels as everything else (>12M), a wide-angle lens that goes down to 24mm eqv, an extended dynamic range, RAW files, a viewfinder, manual capabilities and a good user interface. It seems simple but of the final contenders shortlisted here, and of course none fit the bill. I chose the LX3 mainly for its lens and its ability to do RAW files and the fact that it is the same hardware as the

Leica D-Lux 4 which cost double the price for only some firmware changes.

Here are my first impressions: 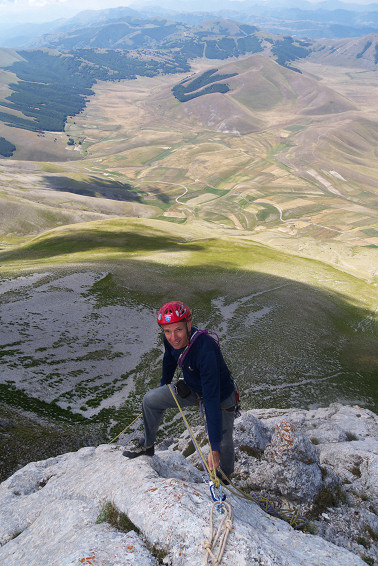 Right: An image of Apennines taken with the LX3 at the widest angle, with the flash. The contrast is well taken care of. Other images on that page show a loss of contrast and color due to the correction of the underexposure and a lack of dynamic range in the highlights.

And the negative things I have to say about the camera:

Overall I find the camera a joy to use and the pictures very good. The consistent underexposure and the unreliable flash being the only real sore points. Now what about some pictures ? The Vettore section is done with this camera.

Fast forward to 2008. Still in search of a compact camera with high dynamic range capabilities to match the S5 to take up with me in the mountains, I saw the Fuji F100fd. I bought it and was immediately strongly disappointed. They don't say what technology they use to achieve the extended dynamic range, but it doesn't work at 100iso, it works 200% at 200iso and 400% at 400iso. So, as a guess, it probably just performs 2 or 3 exposures in very short interval at various sensitivities and stack them using software HDR techniques. It is useless to me as it doesn't work at the lowest sensitivity.

The camera has too many other faults, the main one being that it does not have any manual mode (impossible to set arbitrary aperture and exposure time), no A/S mode, no over/underexposure control, no RAW files. Only useless 'result' modes. Now, quick, tell me the difference between the 'night' mode and the 'fireworks' mode ? I thought so. And finally I don't think the images it takes are all that good anyway, particularly the colors for which Fuji is usually praised look painted over by overzealous pre-processing.

The only nice mode I found is the ability to take two shots in quick succession, one with and one without the flash. It's quite useful in most situations, both indoors and outdoors.

I won this camera at a photo contest in late 2006. Here are my first impressions: 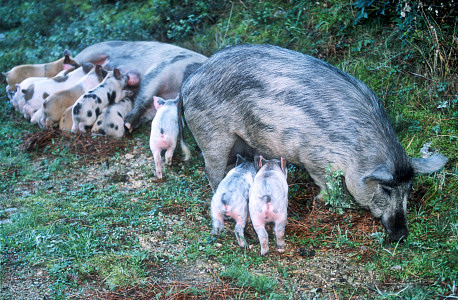 Right: An image of wild piglets and sows taken in Corsica with the DSC-T7.

I must say that this camera makes me appreciate all the more the quality and design of the Ricoh, although I criticized it quite a bit in this review.