Some tips for amateur wedding photography

"It was 1989, I was in graduate school and some friends were getting married. The question — what to give as a gift ? Well... what does any artist give when they don't have much cash ? — their art. So, my present was to photograph their wedding. It was a wonderful wedding/costume party. The groom came as a frog, the bride came as a bird, and I came as a 1950s photographer: a short sleeve white shirt, a bow tie, and a Fedora hat with a press pass stuck in the brim."    — Michael Shuter.

If you are asked to take pictures for a wedding because you are the 'photographer of the family', my first advice is: don't. Weasel your way out of it if you can.

It's a big responsibility, and unless you are pretty sure they won't hate you for life for screwing up, you're better off letting somebody else take care of the baby and the bathwater. But at the same time it makes for a great wedding gift they'll still remember in their retirement home. So if you still want a go at it, here's some advice I have gathered from the 15 or so weddings I have 'performed'. It's advice for amateurs, certainly not for pro wedding photographers who are in a whole different category. But you have one thing above the pros: they usually shoot only the ceremony and the portraits. You can do a lot more for the entire day. And whatever you do, don't ask for money, it will take a lot of pressure off of you.

A couple weeks/days before: 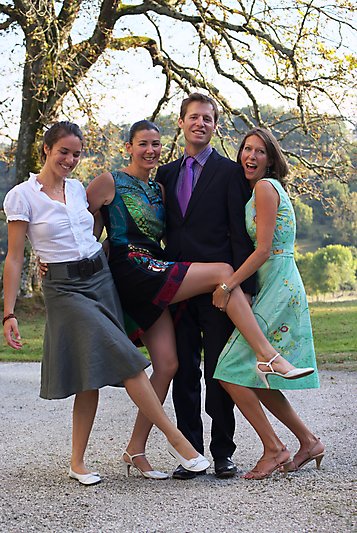 Right: Groups are easy to take... if everybody has eyes open, and is looking in the proper direction. 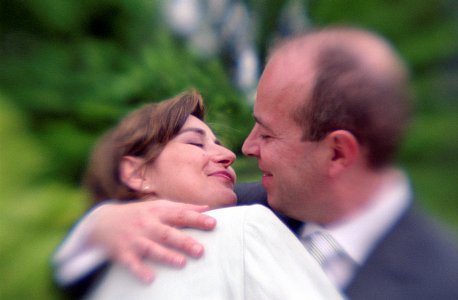 Right: A few specialty filters or lenses such as the

LensBaby can help, but it's easy to overdo it. A few pics like that are enough. 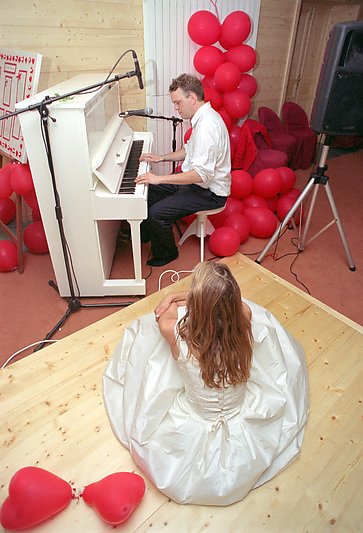 Right: Just a different view to what everybody else can see. 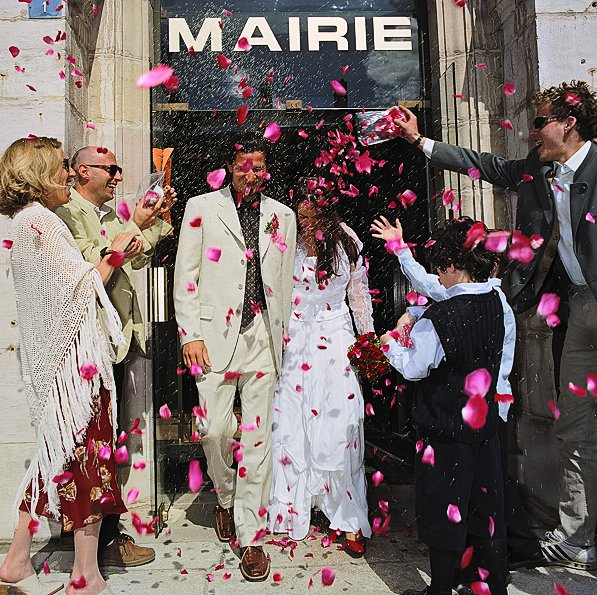 Contact the bride and groom beforehand to know how they plan to organize things and how much time you'll have at each stage. Get them to set aside at least 30 minutes for isolated portrait shots when they can relax and don't need to run around with other things to do. Make sure they understand that and that nobody else is tagging along.

I like to organize the day pics in the following subsets:

Right: Flying rice and rose petals: be ready as it lasts only about 2 seconds.

The dressing up
Mostly of the bride but also of the groom (he's usually a lot more stressed out, so it can be more fun. Remember the paperbag trick when he's about to pass out from hyperventilation. Just kidding). It's not always easy to be accepted during the bride's dress up and showing pics of previous event helps a lot, so you may have to get out when she changes underwear. In any case it's fun and well worth it, until you get thrown out by the bridesmaids.
The ceremony
That's the important part but it's not where you can take the best pics: usually the light sucks and you need to bring up the sensitivity. Also the priests/mayor sometimes looks at you hard when you walk around; just ignore them and do what you need to do. Wear quiet shoes. Don't max out your ISOs for the first time if you don't know what to expect. Pay attention to the timing, in some busy cities the ceremony lasts less than 15 minutes from entering to leaving the place.
The exit
When coming out, remember to LOWER the iso setting. Lay low with a wide angle and the flash so you have a good perspective on the stuff thrown on them. It can be pretty chaotic and very quick.
The cocktail
Walk to the various groups of people talking and drinking and kindly ask them for a pic. Be quick and move to the next group. Refrain from showing your big zoom to the pretty 2nd degree cousin.
The group pics
Possibly during the cocktail or right after getting out of the ceremony. Do some with the bridesmaids, with the best men, with both, with the close parents, with the bride's extended family, with the groom's family, with the friends of each side, with the coworkers, the bridge club, the golf buddies or any group they can think of (ask them in advance). Use a tripod as it gives them a point of reference as well as sharper images. Use a direct flash without reflector or you won't have enough power. If it's sunny, turn them so the sun is about 45deg from their face.
The portraits
Reckon a nice place in advance, with flowers if possible. Use an assistant holding a reflector and teach him to clear out the shadows. Try to time it in order to get a good light (2 hours before sunset is a good bet). You NEED to get away from the crowds and don't let anyone come close, it just distracts them. If you are in an urban setting, check the area beforehand to find a park.
The tables during dinner
Doing portraits of people with wine noses and too many bottles in front of them doesn't usually yield great results, but this way you can be sure to have captured everyone. Let the newlyweds walk to each table to salute the invitees and stand on the other side with a wide angle. If the ceiling is white, use bounce flash.
The party
Let your creativity show: stroboscopy, flash + long exp, black light on the bride's dress, etc... Try not to be too drunk by that time, you'll have time to catch up later. And you can pick up on the girls who already inquire if you are available... for their wedding, even though they don't even have a victim in mind yet.
The backup
Before going to bed, yes.
The RAW processing
Takes longer than the wedding day. 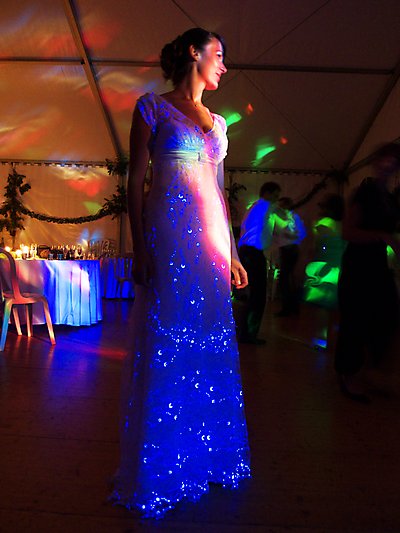 Finally, the images are taken, processed, archived, backed up and ready. What do you do with them ? I do the following 'services':