"As an artist, I work to gain technical skill in order to become more fluid, more expressive and more creative in my craft. Technique is always at the service of creativity."    — Evan Chong. 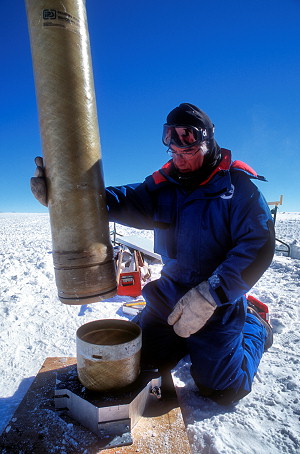 The images shown here were taken using high dynamic range techniques, that is to say by combining images of various exposures. I have a short tutorial on the creation of HDR images on a separate page. In the future I'll also show some HDR images taken directly by the Fuji S5 pro.

Left: Lowering the casing tube into a drilled hole in order to create a Rodriguez well, Dome C, Antarctica. HDR image created from several scans of the same slide in order to compensate for bright snow.

Right: Street at night in old town of Briançon. Assembled from several exposures taken on a tripod.

First of all, why would you want to do that ? Simply in order to work around the limitations of technology. Both films and digital sensors have limits to the range of illumination they can 'grok' at a single time. In some cases of high-contrast scene, no matter what your exposure time is, there will be parts of your image that will be completely black and other parts of the same image that will be completely white. When you look at the scene with your own eyes, the eye adapt to the situation by letting in more or less light depending on where you look and the brains puts the pieces together so you never have this impression of burnt highlights. HDR is a similar technique that overcomes this limitation by using several images. 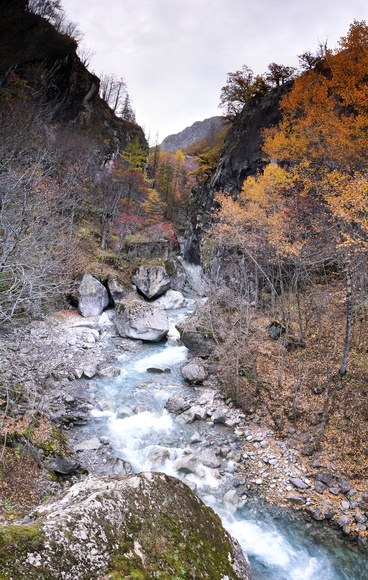 Left: River coming down from the Ailefroide valley in autumn. Here the exposures were varied at the same time than the camera was raised: the lower part is exposed more than the upper part of the image. Result is a bit unrealistic as is often the case with HDR images because the local contrast must be maintained (otherwise the images ends up greyish) while differently exposed areas must be brought to match (otherwise there's simply not enough range in the 0-255 values of jpeg files).

Right: Zoom down the upper part of Peche Veniel, with a view of the maquis shrubland and the bay of Ajaccio, Corsica. The same technique of changing the exposure while doing the panorama is being used here. Note that a similar effect could be achieved using a neutral grey gradual filter, except that it would probably look more realistic with the filter. On the other hand you'd need a fisheye lens to fit the image as a single shot and the resolution would be much lower. 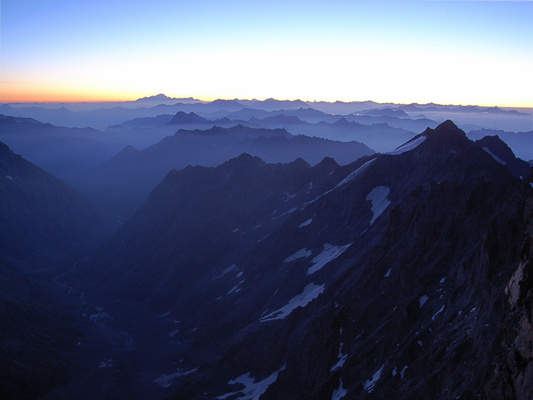 Left: Another image of the Ecrins National Park taken some time after dawn. The high difference between sky and ground required two exposures, an alignment, HDR merge and final high pass filter. 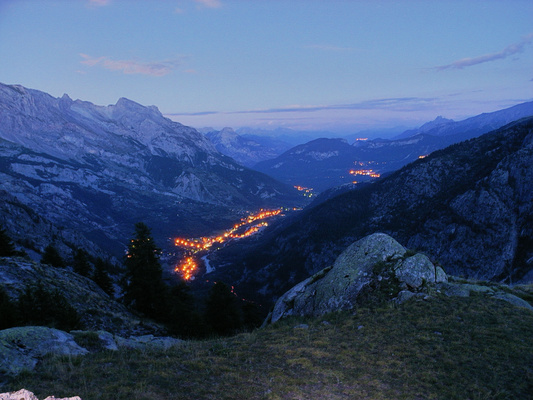 Left: The high contrast between the lights and the scenery makes it a special case for HDR: if the image is exposed for the background, the lights appear as white circles instead of colored dots. This is the village of Pelvoux in Oisans.

Left: This vertical panorama is one of my very first HDR images, and the belay of the 2nd pitch of my favorite climb ever: the Scenic Cruise in the impressive Black Canyon of Gunnison.

There are several techniques to increase the dynamic range of the image: 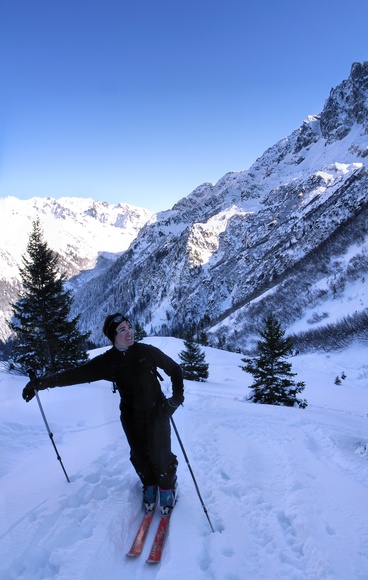 Right: I find that HDR is like any other photographic technique: it's always better when you can't even tell it's there. On this image the high contrast between shaded snow and rock is brought to the level of the high contrast between bright snow and rock... just enough so that you can't really tell it's there and keep this image of backcountry skiing in Belledonne fairly natural looking. 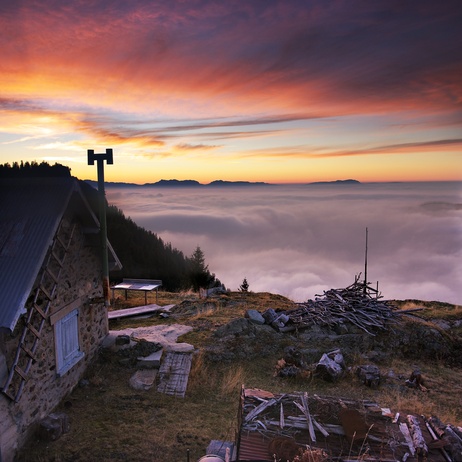 Left: HDR view of the Chalets de la Barriere, near the Poursolet below the Taillefer. Another HDR-specific defect is visible here: wrong tone mapping at junctions: the lower part of the clouds is too bright while the upper part of the house is too dark.

Right: While on assignment in Croatia, an afternoon canoe trip to a beach hidden in a cave under the city led to this nice HDR panorama. Again here, I let the camera decide the optimal exposure for each vertical shot and I took them with lots of overlap so as to end up with a smooth transition zone between the bright sea and the dark cave. I also had to proceed quickly to ensure that the 'bikini models' wouldn't move between shots.

Right: Snow is highly reflective so the contrast is more than what most cameras can handle. A image of skiing on the Taillefer, heavily corrected. The transition on the mountain ridge is nowhere near 'good enough'.

Right: Here's what I consider one of my best HDR shots. I took two images are very close interval, with about one stop of difference. Then they were simply detoured and overlapped in photoshop: of the lighter image I kept the Mt Aiguille, of the darker one I kept the sky. So it's not technically an HDR image, although the original dynamic range of the real scene has been compressed to fit better on a single shot.