Antarctica from the air

"You know what's the second thing you do after you come back home from a winterover ? You remove your backpack..."

C-130 flight to the continent

Left: The cockpit of the south-african C-130 taking the Italian team from Christchurch (NZ) to McMurdo

Right: Watching the Antarctic Coast from the window of an incoming C-130. Excitement is building up as we are about to reach the southern continent.

Left: Passengers on board of a 'civilian C130'. Other flights are done on board of military airplanes and are much less comfortable (no seats).

Right: Passengers sleeping during the flight. The noise level on board the aircraft is so high, it precludes any conversation. You either read or sleep. Or watch out the window in the last hour of the flight if you are fortunate enough to have one handy.

Right: Military C130s part of the US Antarctic Program parked on the McMurdo airstrip.

There can be as many as 10 C-130 at a time on the McMurdo airstrip, ferrying people and equipment back and forth between Christchurch (NZ), McMurdo, South Pole and, rarely, other Antarctic stations. Even foreign nations like Italy land their (rented) C-130s at McMurdo before continuing the trip in Twin-Otter or helicopters to their final destination. Only ice airfields allow airplanes to land with either wheels or skids, the two main ones being McMurdo and Patriot Hills. The only hard-surface airstrip being at the british station of Rothera, C-130s from the rest of the world basically have few options. Once airplanes reach the continent, skids are installed in replacement to wheels so they can fly to other destinations such as South Pole with its snow airstrip.

Twin Otter flights on the coast

Left: Flying above the frigid Antarctic Ocean, with a few chunks of floating ice.

Right: Flying above a tabular iceberg.

Right: Flying above the edge of the ice shelf. This is what breaks into tabular icebergs.

Left: Flying above sea ice, where breaks into the ice have refrozen into some imitation of roads.

Right: Flying above the edge of the sea ice.

Left: Flying above a different kind of sea ice, a mix of sea-ice and sastrugi from recent snows (I guess)

Right: Approach to the bay of Terra Nova, before landing on the remaining sea-ice.

Do these flights ever crash ? Fortunately not too often. Twin Otters aver very reliable and can land safely without engine. There have been a few hard landings where the soft snow or tall sastrugi have broken or bent the landing rig, resulting in some nosedived airplanes without victims (to my knowledge). Still in 2013, my friend Bob Heath and 2 others died after hitting Mt Elizabeth while in a whiteout. He's sorely missed.

From a passenger point of view (and most likely also the pilot's), the most scary are the landings in zero visibility resulting from whiteout or strong wind-blowing winds. Satellite images can usually inform about the conditions of the landing area before take off, but on the coast winds can start in minutes and drop the visibility to zero in the same short amount of time. Midway points are always equipped with extra fuel and survival equipment in case an aircraft is turned back by adverse weather, or worse by poor weather on both ends of the trip.

A couple of years ago a whiteout started shortly before the airplane was due for landing, too late to turn tail; all the pilot could see where the top of the towers which he overflew several times to get his bearing before finally landing right in the middle of the parking area.

Also dangerous are the C-130 with their rocket-assisted take offs, here's a first hand recount of such a series of crashes. Or helicopter crashes like happened to some friends years ago...

Left: The Pétrel island, seen from helicopter. The main French base of Dumont d'Urville is located on the top of the island, less than a km from the Antarctic continent itself (the glacier visible at the top of the image). At the lower left corner, you can see the tip of the much debated airstrip, never used due to storm damage, an ecological and financial nightmare.

Left: The MS Italica, the italian Antarctic ship, at rest in the bay of Terra Nova seen from a helicopter. Mario Zuchelli Station (MZS) can be guessed in the background on the rock peninsula. The sea ice is breaking away from the bay. The chopper is flying from the late season landing field on the glacier behind to the MZS station.

Twin Otter flights on the continent

Left: Flying above the Transantarctic Range.

Right: Two very different glaciers merging. The start of a central moraine is visible on the right, between them.

Left: Central moraine visible from above on a glacier.

Flying above the high antarctic plateau

Left: View outside the passenger window of a Twin Otter.

Right: A Twin-Otter in flight, the workhorse of Antarctic operations.

Right: Aerial view of Concordia located at the top of Dome C.

Left: Flight crew getting ready for landing at Dome C.

Right: Twin Otter in landing approach above the flags of the Dome C summer camp. 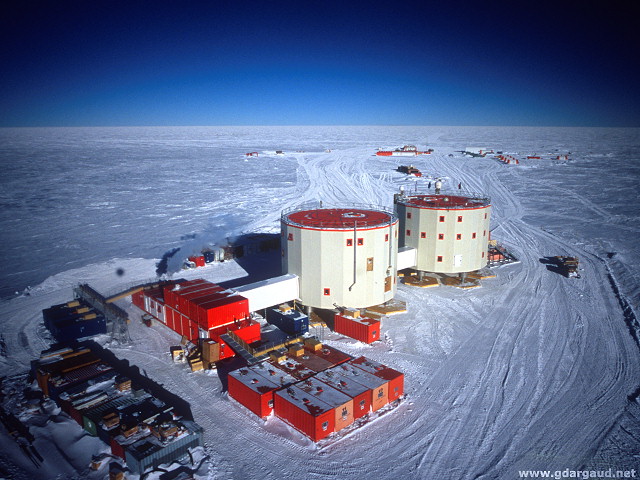 Right: Aerial view of Concordia taken with a Ricoh GR21 suspended from a single balloon. Can you spot the shadow of the balloon ?

The pictures above were taken either from mechanical aircrafts but there are also other means to perform aerial photography, even without going as far as space imagery: kite or balloon photography. I was fortunate enough to be in charge of atmospheric science balloon launches during the 2005 Concordia winterover. During the second summer, shortly before my departure, I experimented with a camera attached below a tethered balloon, and later used the balloon for the daily atmosphere measurements. I first tried with my very light wide angle GR21 camera, but I had stability problems leading to shaky images, also the camera would point at totally random directions resulting in few interesting frames. I then tried with an 8mm fisheye lens mounted on a Nikon camera. No more direction problem with a 180° field of view. I was using the time delay of the camera and bringing the balloon down between each shot to press the trigger again, which also allowed me to check for proper functioning.

Left: Aerial view of Concordia station taken right above the garage tent next to the quiet building.

Right: Another aerial view of Concordia, with a slightly different angle showing a curved horizon.

Right: Aerial view of Concordia station, but here I unrolled the fisheye image to produce a 360° panorama. The sine cutoff is due to the way the image was produced as I wanted to impose a straight horizon line. You can see me and a colleague in the lower-right corner, holding the line to the balloon (invisible above). I'm actually visible on all those images, can you spot me ? 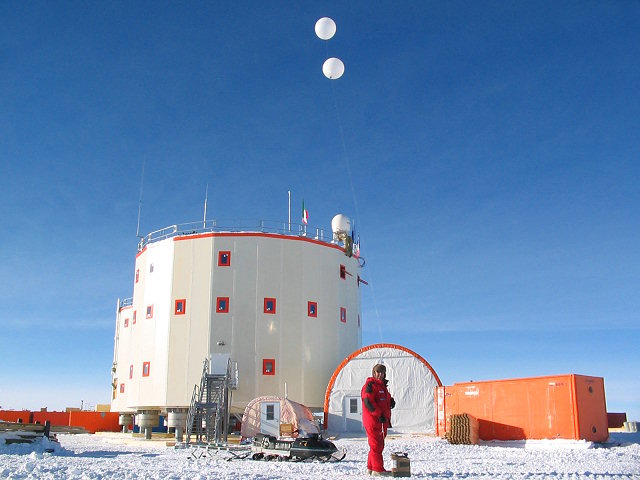 Left: A picture of the setup used to shoot the images above. Here Carlo is helping me hold the balloons, tied to a heavy weight, while they hover with the camera above the garage tent.